Khater cited the strong jobs numbers released by the U.S. Bureau of Labor Statistics (BLS) which found that total non-farm payroll employment rose by 943,000 in July 2021, and the unemployment rate declined by 0.5 percentage point to 5.4%, with notable job gains found in leisure and hospitality, in local government education, and in professional and business services. 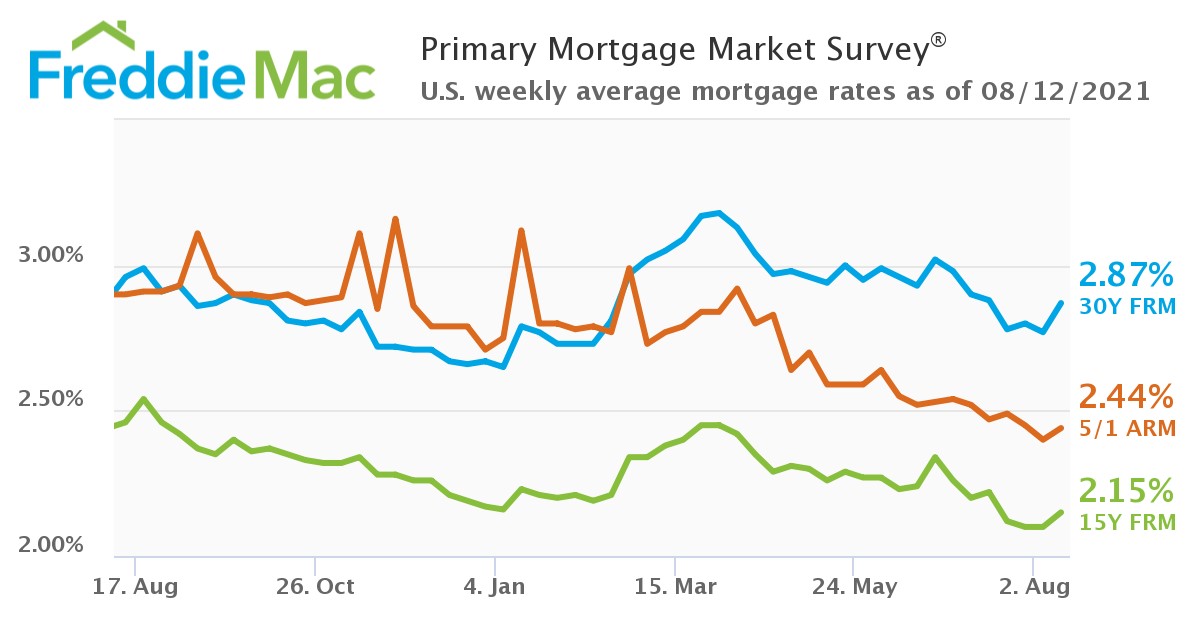 "For real estate markets, low rates are fueling strong activity into the late-summer season, which historically has seen a slowdown," said Realtor.com Senior Economist George Ratiu. "Realtor.com’s weekly data show that the number of newly-listed homes for sale continues to grow, leading to a noticeable moderation in the pace of price gains, which have risen less than 10% year-over-year for the past two weeks, the first time we’ve seen this in the last year. The combination of rising inventory, slowing price gains, and low interest rates offer a much-needed ray of sunshine to many buyers who have been growing increasingly exhausted by an extremely competitive housing landscape. These factors also signal that fall may turn out to be a busier season than usual, as buyers seek to take advantage of improving market conditions.”

With rates still under the 3% range, mortgage applications rebounded last week, as the Mortgage Bankers Association (MBA) reported that for the week ending August 6, 2021, apps increased 2.8% week-over-week, led by refis which accounted for 68.0% of total applications over 67.6% the previous week.

However, continued short supply and low inventory paints a picture of increasing affordability concerns for buyers despite the low rates. A recent Zillow study has found that as the price of homes continues to drive higher, mortgage payments as a percentage of U.S. income reached 19.4% in June, and are anticipated to surpass 2018 levels in August. Assuming home values grow in line with what Zillow economists have forecast, that percentage could rise to more than 23.1% by the end 2021, depending on where mortgage rates are heading in the coming months.

For those stashing away savings who plan to jump on these continued low rates, rent payments as a portion of income are forecast to rise from 29.96% in June to 30.2% by December. This will push rents beyond the 30% threshold for renters being housing burdened, leaving less money for groceries, bills, and other expenses such as saving for a down payment. Previous research found that when rent affordability reaches above 32% housing costs can lead to a rapid rise in homelessness. As of June, 10 of the 50 largest U.S. metros have rent burdens beyond 32%, and Denver is expected to join that list by December.