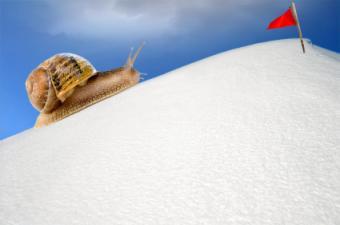 Forecasters expect U.S. economic growth to slow down slightly over the next four years as unemployment remains steady.

According to the Q3 2015 Survey of Professional Forecasters by the Federal Reserve Bank of Philadelphia, 42 forecasters expect real GDP to grow at an annual rate of 2.7 percent this quarter and 2.8 percent next quarter.

The Philadelphia Fed reported that the labor market outlook remains unchanged. The forecasters predicted similar results as the last survey for unemployment, noting that it will be an annual average of 5.3 percent in 2015, before falling to 5.0 percent in 2016, 4.8 percent in 2017, and 4.7 percent in 2018. 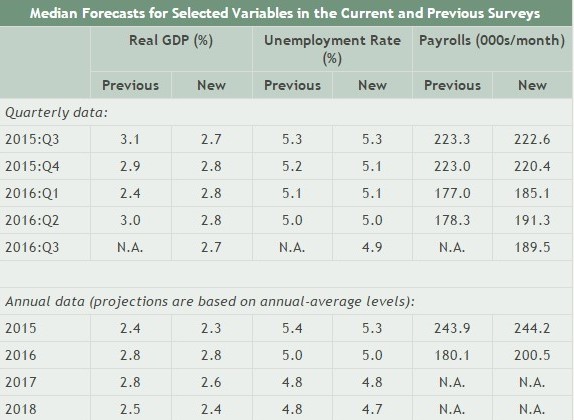 The nation's real gross domestic product (GDP) bounced back from a dismal first quarter with an annual growth rate of 2.3 percent in the "advance" estimate for Q2 released by the Bureau of Economic Analysis (BEA) released yesterday.

The GDP growth rate in the first quarter, which was reported to be an annual rate of minus 0.2 percent in the BEA's third and final estimate released in late June, was revised upwardly and reported on Thursday to be 0.6 percent.

"These results are in line with years past when we have had a very weak first quarters followed by more normal second quarters," said Mark Fleming, chief economist with First American. "The quarter-over-quarter jump isn't a signal of rebounding, but is simply a return to more normal rates of growth. The 2.3 percent rate for the second quarter is probably in line with where we will land at the end of the year—2.3 percent for 2015."

In late May, the U.S. Bureau of Economic Analysis (BEA) issued a downward revision of what analysts had already deemed "paltry" growth of 0.2 percent in the advance estimate for Q1 reported at the end of April.

Despite economic growth taking a step backward, the forecast for housing for the rest of the year remains positive, according to Fannie Mae SVP and chief economist Doug Duncan. New home sales increased by 6.8 percent in April up to 517,000 annualized units; the National Association of Realtors' Pending Home Sales Index has risen by 14 percent in the last 12 months; existing home sales are at a nine-year high; and purchase applications recovered at the end of May from a slow first half of the month up near a two-year high.

"Housing indicators look good," Duncan said. "Pending home sales, new home sales, and starts look good. An underlying number in the GDP, the gross domestic income, was positive. And the confidence numbers seem to be doing well (the Conference Board's Index rose 1.1 points up to 95.4 in May). The GDP seems to be inconsistent with the underlying trend line."

Rob Dietz, the Chief Economist at the National Association of Homebuilders, spoke with MReport on how COVID-19 has impacted the industry and forecasts for home price growth.