A weak GDP report for the advance Q2 estimate (1.2 percent) did not deter builder sentiment for August, according to the National Association of Home Builders (NAHB).

Builders’ confidence in the market for newly-build single-family homes picked up from July to August, rising up to 60—an improvement of two points over July’s downwardly revised reading of 58, according to the NAHB/Wells Fargo Housing Market Index (HMI) for August released Monday.

HMI’s three components (builder perceptions of current single-family home sales, sales expectations for the next six months, and prospective buyer traffic) are scored and then averaged; an index score over 50 indicates that more builders view conditions as good rather than poor.

The bad news brought by the first GDP estimate for the second quarter was offset by good news as far as mortgage rates and the labor market.

“New construction and new home sales are on the rise in most areas of the country, and this is helping to boost builder sentiment,” said NAHB Chairman Ed Brady, a home builder and developer from Bloomington, Illinois.

The August builder's confidence index rose by two points after declining by one point from June to July from 60 to 59; July's reading was later revised downward to 58.

“Builder confidence remains solid in the aftermath of weak GDP reports that were offset by positive job growth in July,” said NAHB Chief Economist Robert Dietz. “Historically low mortgage rates, increased household formations and a firming labor market will help keep housing on an upward path during the rest of the year.” 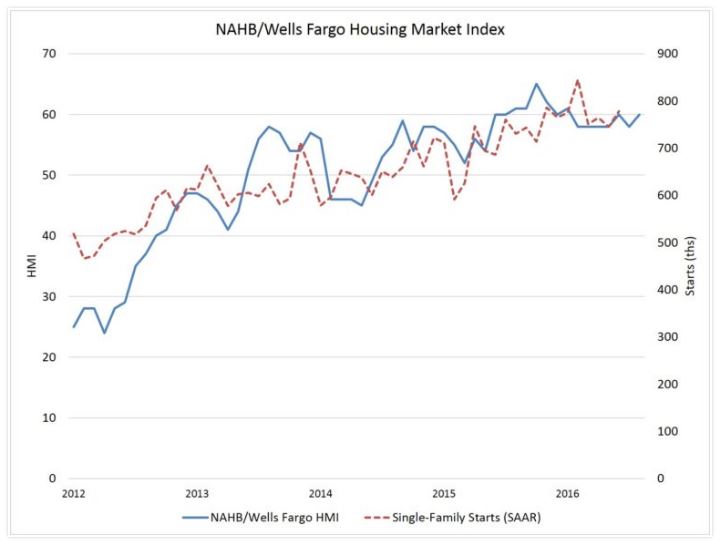 The HMI saw two of its three components post gains from July to August. The current sales conditions component also rose two points up to 65 from July, while the sales expectations for the next six months component ticked up by one point up to 67. The component of the HMI measuring buyer traffic remained below 50, falling by one point down to 44—indicating that more builders view conditions in that area as poor than good.

Region-wise, the West had a three-month moving average HMI score for August with 69, unchanged from July but still the highest among regions. The South had the second-highest reading at 63, an improvement of two points from July.

Perhaps it is not surprising that these two markets had the highest readings, given the recent positive reports of the housing market coming from those areas. A recent study from OnlineDegrees.com which measured the best cities for millennials to settle using eight key factors (median rent, renter-occupied housing, percent of the population between ages 20 and 34, median earnings, cost of living, arts & entertainment options, state-level job growth, and unemployment) found that nine of the top 10 markets were all either in the West or the South (four in Texas, three in California, one in Oregon, and one in Washington).