The yo-yo that was the U.S. housing market in Q2 will likely remain an uneven piece of the economy for the rest of the year, according to Fannie Mae’s August Economic and Housing Outlook.

Home sales performed well during the second quarter; in June, both new and existing-home sales rose to post-crisis highs. Year-to-date in 2016 through the end of Q2, new and existing-home sales were up by 11 percent and 5 percent from the same period in 2016. According to Fannie Mae, however, with pending home sales (contract signings of existing homes) remaining flat in June and purchase mortgage applications leveling out, leading indicators suggest a near-term pullback in home sales.

Duncan added that tight inventory from a lack of new construction continues to create affordability challenges, particularly at the lower end of the market, where first-time buyers are getting squeezed out by competition for houses. 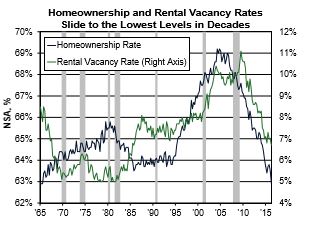 On top of this, the national homeownership rate in Q2 dropped to below 63 percent, though Duncan said there are tentative signs of older Millennials moving toward homeownership. The low interest rate his helping in that regard; the average 30-year fixed-rate mortgage rate has been below 4 percent for the last 8 months and is expected to remain near record lows through the end of the fourth quarter, even if the Federal Reserve raises the federal funds target rate later in the year.

“We expect homebuyers will benefit from improving job and wage growth, more favorable lending standards, and continued low mortgage rates through the rest of the year,” he said.

Overall, Duncan expects economic growth to rebound in the second half, keeping the full-year growth outlook at 1.8 percent. A “stellar July jobs report suggests consumers may benefit from near-term improvement in personal incomes and a strengthening hiring trend,” the report stated. “This, in turn, will likely support a more sustainable pace of inventory accumulation and help soothe concerns over the health of businesses, which have faced lackluster profits and productivity and have pulled back on capital expenditures.”

While Duncan called Q2’s growth “a disappointment,” inventory investment should balance out.

“Credit expansion, combined with improving labor market conditions and strengthening household balance sheets, should continue to support consumers, who will likely be the primary driver of growth again in the second half of the year,” Duncan said, adding that “although much of the financial volatility from Brexit has subsided, long-term Treasury yields continue to face downward pressure and we expect them to remain low for some time.”