Many believe that the Baby Boomer generation have begun downsizing from their single-family homes to live in apartments. A recent housing insights report from Fannie Mae's Economic & Strategic Research Group challenges this idea, finding that Baby Boomers are not fleeing to apartments but remaining in their homes.

Fannie Mae research found that the Baby Boomer generation, or those born between 1946 and 1965, are not downsizing from their single-family homes in large numbers or moving into apartments, thereby helping to drive the surge in multifamily rental demand.

The report found that available data through 2013 showed no significant reduction in the rate at which Baby Boomers occupy single-family detached homes. In addition, although the average number of rooms in single-family homes occupied by Baby Boomers decreased between 2008 and 2011, Boomer home size has increased since then. This suggests that Boomers are not opting for smaller single-family houses, either.

"As suggested by the lack of downsizing activity, Boomers have not been a major driver of apartment demand growth," the report said. "In fact, the number of Boomer apartment dwellers has not budged in recent years, whereas the number of Millennials in multifamily rental units has grown by nearly half a million annually." 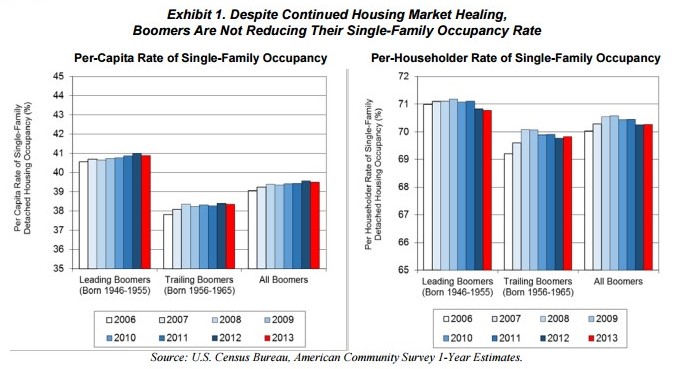 The fact that Boomers do not appear to be downsizing does pose certain implication for the housing market, as they do occupy 32 million single-family detached homes and account for half of the nation's housing wealth. Therefore, any significant changes in their housing consumption could greatly affect the housing market.

"Moves by large numbers of Boomers from single-family homes to apartments could put downward pressure on single-family home prices, shift the composition of new housing construction further toward multifamily structures, and change the types of apartments being built," the report said. "Although Boomers’ consumption of single-family homes will decline eventually, and thus should be watched closely, available data do not yet provide an indication of substantially changed behavior for this market-moving cohort."