New single-family home sales took a notable upturn in July, with the month becoming the best month for new sales since 2007, according to HUD and the U.S. Census Bureau.

July’s numbers are the latest in a steady trend toward more new home sales overall, and some industry insiders think the trend is only going to continue.

Liu said that if anything will limit growth, it will be the limited supply of land and labor, and homebuilder’s focus on higher-price segments. Inventory shortage has been a drag on growth in many areas, particularly affecting new-to-market buyers who can’t compete with wealthier buyers in the bidding wars taking place.

The seasonally adjusted estimate of new houses for sale at the end of July was 233,000. This represents a supply of 4.3 months at the current sales rate. 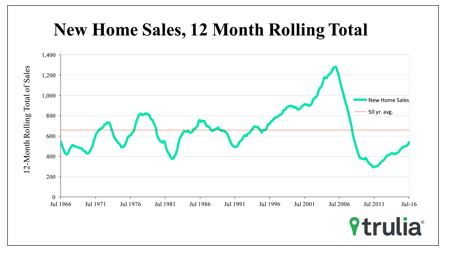 “July’s surge in new home sales continues to support the sentiment that demand for homes is strong despite homebuyers facing low existing inventory,” McLaughlin said. “July shows the 12-month rolling total of new homes sales was the best in eight years and boosts sales to 82 percent of the 50-year norm.”

This, of course, is based on taking for granted that the HUD/Census numbers for July were accurate, which McLaughlin cautioned against just yet.

“It’s important to note that new home sales numbers from the U.S. Census are extremely volatile,” he said. “The margin of error is wide and often includes zero, which means we can't be certain whether these month-over-month or year-over-year changes actually increased, decreased, or stayed flat.”

He added, however, July’s numbers are a rare case where the year-over-year change is statistically significant, indicating that the surge in sales “can be taken with more than just a grain of salt.”