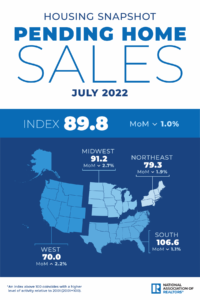 The Pending Home Sales Index (PHSI), which measures housing contract activity, again fell in July, the second month in a row and the eighth time it has fallen this year. In addition, three out of the four major regions in the country also reported declining numbers, as one region, the West, posted a minor gain.

This information comes by way of the National Association of Realtors (NAR) who has been publishing this report since 2001. The index was benchmarked to 100 based on contract activity in 2001.

"In terms of the current housing cycle, we may be at or close to the bottom in contract signings," said Lawrence Yun, NAR’s Chief Economist. "This month's very modest decline reflects the recent retreat in mortgage rates. Inventories are growing for homes in the upper price ranges, but limited supply at lower price points is hindering transaction activity."

This report comes at the heels of a separate report that found affordability in June fell to a level not recorded since 1989. Accounting for a 30-year fixed-rate mortgage and a 20% down payment, the monthly mortgage payment on a typical home jumped to $1,944, an increase of 54%, or $679, from one year ago.

"Home prices are still rising by double-digit percentages year-over-year, but annual price appreciation should moderate to the typical rate of 5% by the end of this year and into 2023," Yun added. "With mortgage rates expected to stabilize near 6% alongside steady job creation, home sales should start to rise by early next year."

“Contract signings for existing homes are highlighting that buyers have reached the limit of their financial wherewithal to handle the impact of high inflation, property prices, and interest rates, with a 1.0% monthly slide, to the lowest level since April 2020 at the height of the pandemic. The monthly decline was propelled by drops in all regions, except the West. At the same time, pending home sales tumbled 19.9% from July of 2021, with double-digit drops in all major regions.”

“Summer is historically the peak period for home buying in a given year, as we’ve generally seen larger homes exchange hands at top prices. This year’s summer housing market definitely notched record prices. However, sales of existing homes have been on a sharp decline, accompanied by an equally significant drop in sales of new houses. Today’s data point to continued weakness in home sales going into the latter half of this year.”

“For buyers, the early 2022 rush to lock in low mortgage rates before they rose even higher has since been replaced by the reality that sub-3% rates are a thing of the past. In addition, with the number of homes for sale growing with each month and accompanying price reductions gaining steam, signaling a transition toward a relatively healthier market, buyers are remembering that home inspections, contingencies, and price negotiations are typically the norm. In turn, many home shoppers are choosing to take a wait-and-see approach as we count down the last remaining weeks of summer, casting a cautious eye toward the cooler seasons ahead and the potential discounts they may bring.”

“Importantly, current trends remind us that real estate markets move in cycles, and this one is no different. After a period in which the Federal Reserve boosted capital markets with its monetary easing, we are now in a stage of tightening, which will see borrowing costs continue to increase in an effort to rein in fast-paced inflation. With interest rate hikes expected to continue for several more months, we will see real estate demand remain subdued.”

“Home sales activity continued to be lower than a year ago, with new data from the National Association of Realtors showing that July pending sales were down 19.9% year over year. Pending sales activity also fell 1.0% month-over-month, which is a more modest drop off than is typical between June and July.”

“While the year-over-year slowdown in buyer activity is significant, it seems hyperbole to be talking about a housing “recession.” After two years of double-digit price growth, fierce competition among buyers, and offers sometimes tens of thousands of dollars over list price, the housing market is resetting to a more sustainable state. In some markets–notably the West–the number of pending sales actually increased between June and July.”

“In July, mortgage rates were quite volatile in reaction to the strong jobs report, the drop in the inflation rate, and the Federal Reserve’s rate hike. Even as mortgage rates dipped below 5% at the end of the month, buyers did not immediately rush back to the market. According to weekly data for the Mid-Atlantic, new purchase activity actually declined during the last week of July as rates were falling. With lower inflation and a strong labor market, the Federal Reserve likely will move less aggressively on rates at the September meeting and mortgage rates could stabilize, easing that rate volatility.”

“But prospective buyers are looking at more than just interest rates. Sellers are cutting prices and inventory is expanding, which is providing more options for buyers. The slower-than-average decline in pending sales activity between June and July suggests there may be more buyers in the market after Labor Day who are seeing stabilizing mortgage rates and sellers willing to cut prices and negotiate terms. Though the market will remain cooler than a year ago, expect pending sales to increase as we head into fall.”