Single-family home prices have been steadily appreciating since bottoming out a little more than four years ago—in fact, June 2016 marked the 50th consecutive month of year-over-year home price appreciation, according to the S&P CoreLogic Case-Shiller Indices for June released Tuesday.

“Though this is a sign that the U.S. housing market continues to stabilize, homebuyers are still being challenged as prices outpace income growth yet again,” Trulia Chief Economist Ralph McLaughlin said.

“Prices in last month's three hot markets (Portland, Seattle, and Denver) continue to lead the pack with increases between 9.2 percent to 12.6 percent,” McLaughlin said.  “Though Western markets dominate U.S. price growth, San Francisco continues to show a noticeable cooldown. Home prices in the City by the Bay increased of 6.4 percent, which is the smallest annual gain since August 2012. The continued slowdown suggests the San Francisco housing market might start looking more 'normal' by the end of the year, but the market still has a long way to go before most Bay Area homebuyers would agree.” 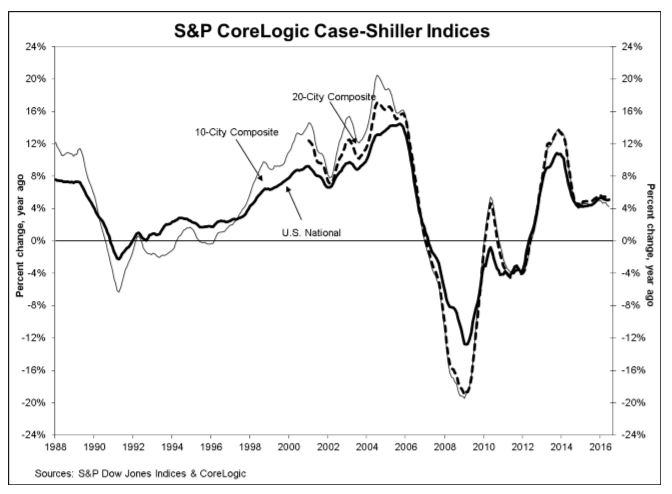 “Overall, residential real estate and housing is in good shape,” Blitzer said. “Sales of existing homes are at running at about 5.5 million units annually with inventory levels under five months, indicating a fairly tight market. Sales of new single family homes were at a 654,000 seasonally adjusted annual rate in July, the highest rate since November 2007. Housing starts in July topped an annual rate of 1.2 million units. While the real estate sector and consumer spending are contributing to economic growth, business capital spending continues to show weakness.”

The S&P CoreLogic Case-Shiller Indices were not the only measure of house prices that reported slower year-over-year gains. Earlier in August, the FHFA’s Q2 Home Price Index, which calculates the HPI using home sales price information from mortgages sold to or guaranteed by Fannie Mae and Freddie Mac, increased by 1.2 percent over-the-quarter and 5.6 percent over-the-year; however, it increased by just 2 percent from May to June.

“Although the appreciation rate for the second quarter was of similar magnitude to what we’ve been seeing for several years now, a close look at the month-over-month price changes during the quarter reveals a potentially significant market shift,” said FHFA Supervisory Economist Andrew Leventis. “Our monthly price index indicates that in each of the three months of the quarter, the increase was only 0.2 percent. This is a much more modest pace of appreciation than we’ve seen in some time and most likely reflects accumulated pressures from significantly reduced home affordability.”

The Case-Shiller National Home Price Index came with a caveat, according to McLaughlin.

“While the S&P Case-Shiller National Home Price Index is an important metric to watch, it’s worth noting that the measure is more reflective of price movements in premium homes rather than middle or lower-tier homes,” McLaughlin said.

Previous: ClosingCorp Names New National Account Representative
Next: Demand for Housing is Starting to Come Back to Earth