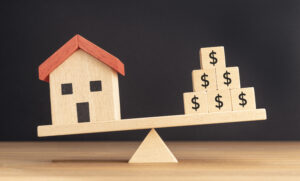 “The deceleration in U.S. housing prices that we began to observe several months ago continued in June 2022, as the National Composite Index rose by 18% on a year-over-year basis,” said Craig J. Lazzara, Managing Director at S&P DJI. “Relative to May’s 19.9% gain (and April’s 20.6%), prices are clearly increasing at a slower rate. This pattern is consistent with our 10-City Composite (up 17.4% in June vs. 19.1% in May) and our 20-City Composite (up 18.6% in June vs. 20.5% in May). It’s important to bear in mind that deceleration and decline are two entirely different things, and that prices are still rising at a robust clip. June’s growth rates for all three composites are at or above the 95th percentile of historical experience. For the first six months of 2022, in fact, the National Composite is up 10.6%. In the last 35 years, only four complete years have witnessed increases that large.”

Regionally, for the fourth consecutive month, Tampa, Florida posted the strongest annual home price growth among the 20 markets polled, surging by 35% in June, down from May’s non-seasonally adjusted rate of 36.1%. Miami ranked second, recording a 33% year-over-year gain in June, down from 33.9% the month before. Dallas ranked third, with a 28.2% increase in June, while Phoenix fell to the fourth position with a 26.6% jump–down from February’s 32.9% gain, when it last held the index’s strongest price growth position. 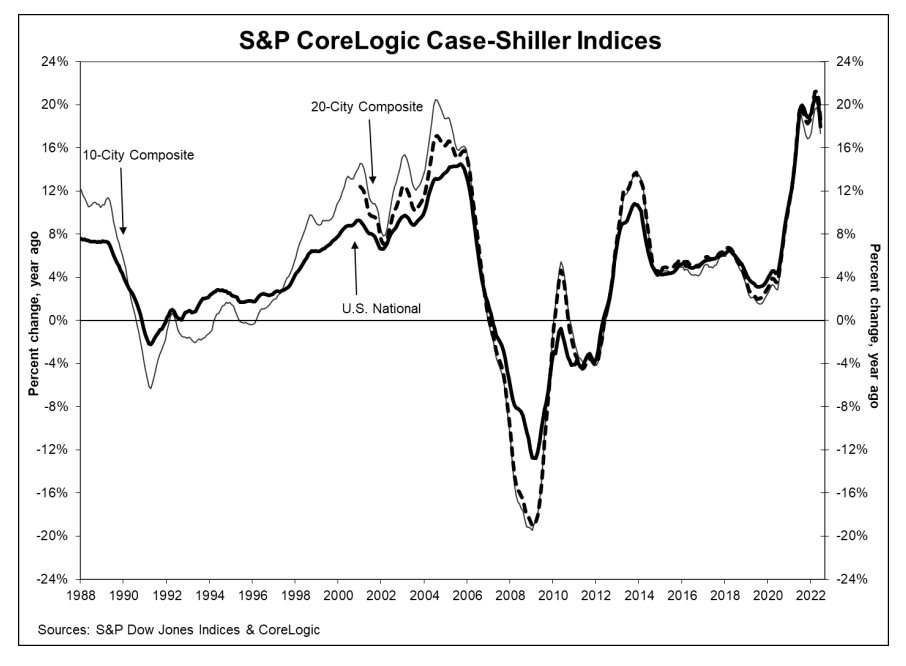 San Francisco, Seattle, and San Diego posted the largest slowdowns in annual gains compared to May, as Chicago, up by 13.3%, was the only metro that posted an increase in annual gains over the last two months. Minneapolis and Washington continued to post the slowest increases in annual gains, a respective 10.4% and 10.8%. Despite having the slowest rate of annual price increases, these metros have still experienced double-digit growth rates for 19 consecutive months.

“Markets in the West, including Seattle, California coastal metros, Portland and Denver, saw most notable waning of home prices growth in June,” said CoreLogic Deputy Chief Economist Selma Hepp. “According to the CoreLogic HPI Forecast for June, home prices will continue to slow, but not decline in most markets over the next year.”

“We’ve noted previously that mortgage financing has become more expensive as the Federal Reserve ratchets up interest rates, a process that continued as our June data were gathered,” said Lazzara. “As the macroeconomic environment continues to be challenging, home prices may well continue to decelerate.”

“While higher interest rates, slower growth and softer labor market conditions will bring down inflation, they will also bring some pain to households and businesses,” said Powell. “These are the unfortunate costs of reducing inflation. But a failure to restore price stability would mean far greater pain.”

The National Association of Home Builders (NAHB) reported that forecasters estimate the Fed will ultimately raise this rate to between 3.5% and 4% by early 2023, and if the rate does hit this mark, a top mortgage rate in this cycle could eclipse the 6%-mark.

“With buyers running out of financial options, it is not surprising that sales of new and existing homes have been dropping in the first half of the year,” said George Ratiu, Senior Economist & Manager of Economic Research for Realtor.com. “Compared to trends we saw during the pandemic, when home shoppers’ fear of missing out on record-low mortgage rates fueled a feverish search for a safe haven, today’s housing market is experiencing a hangover of sorts.”

And as this combination of high rates and continued inflation sets back the nation’s home buyers, one bright spot for the housing market has been an influx of homes into the nation’s housing inventory. Reversing the trend of the dearth of available choices just a few short months ago, Zillow reports that housing inventory is up 5.1% on a monthly basis, yet new inventory fell 13.6% month-over-month in July. Compared to July 2019, 15.5% fewer new listings came on the market. This new inventory figure does not include new construction, so it represents current homeowners deciding not to list their homes.

“For sellers, it is clear that today’s housing market is changing rapidly, and striking the right price from the start could be key to a timely and successful transaction,” said Ratiu. “The latest Realtor.com survey focused on sellers highlights that 92% of homeowners who sold this summer had to accept concessions in a changing market, a visible sign that buyers are regaining their bargaining power. A majority of today’s home shoppers are asking for home inspections and expecting to have necessary repairs made before closing. Moreover, price negotiations have returned to the market, a much-needed and welcome development on the road toward a new normal. Buyers who have been wondering if they will get a break during the last two years are looking upon a more promising horizon in the next few months.”