Vacancies continued to rise across 23 single-borrower, single-family rental transactions (covering nearly 90,000 properties) as higher monthly lease expirations in the summer pushed the vacancy rate to 4.9 percent in July from 4.5 percent in June, according to the recent Morningstar Single-Family Rental Summary for August 2016.

July marked the fourth straight monthly increase in vacancy, but the overall level remained low, according to Morningstar. At 7.4 percent, Houston had the highest vacancy rate among metros most typically seen in single borrower, single-family rental transactions.

“The relationship between lease expirations and vacancy generally remains at the MSA (metropolitan statistical area) level and can be seen in Houston and Chicago. Houston and Chicago have historically had higher than average vacancy rates,” the authors of the report stated. “However, Houston and Chicago had July rental changes of 2.9 percent and 2.8 percent, respectively. While this is lower than the overall average rent change of 5.2 percent, it demonstrates that these MSAs are still experiencing rental increases despite their higher than average vacancy.” 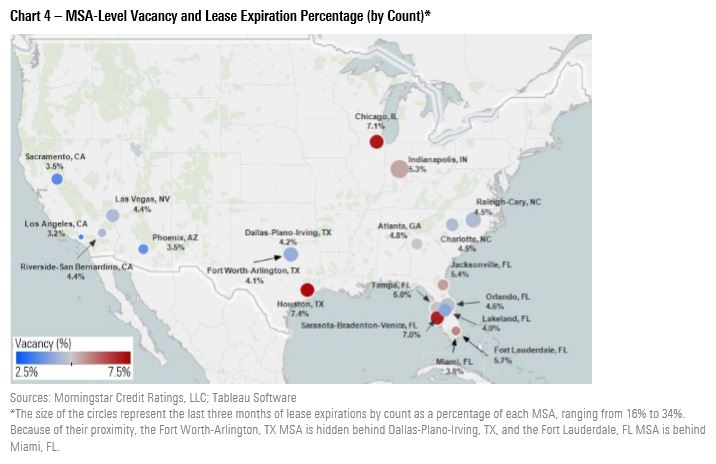 Additionally, delinquency rates in single-family rental securitizations rose up to 0.6 percent in July from 0.5 percent the prior month, according to Morningstar. As of June, the most recent data available, retention rates for full-term leases stayed in the mid-70s, as 21 of the 23 transactions reported a retention rate of 70 percent or above. Because more leases expire in the summer months, the turnover rate tends to rise, according to Morningstar.

Morningstar shows that rents for properties backing single-family rental securitizations rose by 5.2 percent from their prior contractual rents, continuing to outpace the year-over-year increases of three- and four-bedroom RentRange, LLC median rents. They report, however, that the margin narrowed. In addition, Morningstar shows that average contractual rents in the top single-family rental MSAs are mostly higher than their property-level RentRange estimates.

Click here to view the complete report from Morningstar.