Mortgage Rates Bump Up In Anticipation of Fed Action

Mortgage interest rates, which have been hovering near record lows for the last two to three months, bumped up this week due to the increasing possibility of the Federal Reserve raising the federal funds target rate later in September.

Freddie Mac’s latest Primary Mortgage Market Survey (PMMS) reported on Thursday that the both average 30-year fixed-rate mortgage (FRM) and 15-year FRM edged up by three basis points up to 3.46 percent and 2.77 percent, respectively, for the week ending September 1, 2016. Both rates were down significantly year-over-year—last year at this time, the average 30-year FRM was 3.89 percent and the average 15-year FRM was 3.09 percent.

Even with the increase, the current 30-year FRM rate is still only 15 basis points above the record low of 3.31 percent set in November 2012. 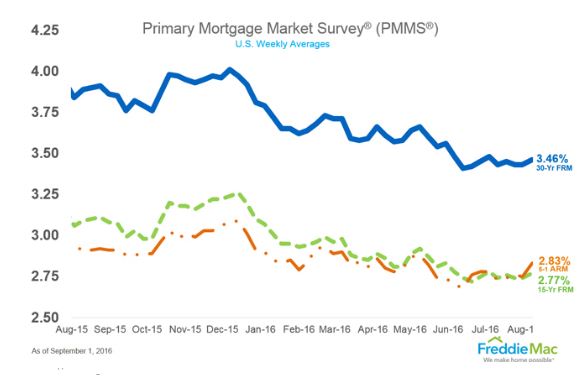 “Mortgage rates moved a touch higher on a slightly increased possibility of a move by the Fed in September,” said Keith Gumbinger, vice president of HSH.com. “Last Friday's speech by Fed Chair Janet Yellen suggested that the Fed believes the economy is on a better path than earlier this year, and that it will soon be appropriate to raise short-term interest rates.”

Yellen’s speech on August 26 in Wyoming along with recent speeches from Fed Vice Chair Stanley Fischer and the presidents of several Federal Reserve Banks suggest that at least one rate hike is on the horizon before the end of 2016. On Friday, September 2, all eyes will be watching the BLS Employment Situation for August—a solid report, which would be the third one in a row, might prompt the Fed to raise short-term interest rates.

Gumbinger suggested that mortgage rates are going to remain at their current levels for the near term.

“While economic growth in the second quarter of 2016 was a weak 1.1 percent, all signs point to a pickup in the third,” Gumbinger said. “Incoming data seems to suggest that the 'Brexit' disruption has been minimal, and concern about that impact was a key factor in keeping the Fed from moving in June. With markets calm and the economy picking up, the case for a move by the Fed grows, and in turn, interest rates tick higher. However, in the current climate, they cannot go very far.”

Previous: Home Value Appreciation: A Double-Edged Sword
Next: The Potential Effects of Consumer Complaints on Servicers