U.S. home sales continue to float in a healthy range as suggested by trends in the August 2016 Ten-X Nowcast released this week.

Despite facing some challenges, underlying demand for housing remains strong thanks to the firm labor market, low unemployment, low mortgage rates, and improving wage growth, and these conditions remain supportive of the housing market—although this demand is hindered by tight inventory levels, which in turn is increasing price growth and eating into affordability prospects.

According to Ten-X, July home sales would be range-bound and the latest Nation Association of Realtors (NAR) release confirmed this, showing a 3.2 percent decline to a seasonally adjusted 5.39 million rate. In addition, the July sales rate marked a 1.6 percent year-over-year decrease.

The NAR data confirmed the median home price Ten-X reported last month, as the median existing-home price for all housing types was $244,100 in July—a 5.3 percent increase from a year ago and the 53rd consecutive month of annual gains.

NAR reported that total housing inventory saw a marginal gain in July to 2.13 million existing homes for sale. This was 0.9 percent higher than last month but still 5.8 percent below last year’s level. Tight inventory levels continue to hold back sales growth but the trend of moderate increases in homes for sale continues as they had anticipated due to higher pricing attracting more sellers into the market, according to Ten-X.

The share of all-cash sales measured 21 percent in July, down from 22 percent from June and 23 percent from a year ago—the lowest percentage since November 2009. Additionally, distressed sales, including foreclosures and short sales, measured 5 percent in July. This was a decrease from 6 percent the previous month as well as 7 percent from a year ago. Likewise, that was the lowest percentage since NAR began tracking the data in October 2008 and a continuation of what they call the normalization of the housing market from the aftermath of the housing bust.

Ten-X notes that though this month’s headline sales figure was less encouraging, they still believe that the high overall sales level continues to signal the health of the housing market. For August, Ten-X believes existing-home sales will stabilize and place August sales in the 5.35 million-5.71 million range, with a targeted rate of 5.53 million. Additionally, this is a marginal 0.5 percent decrease from Ten-X’s July report, and would represent a 2.6 percent gain from the NAR sales rate. 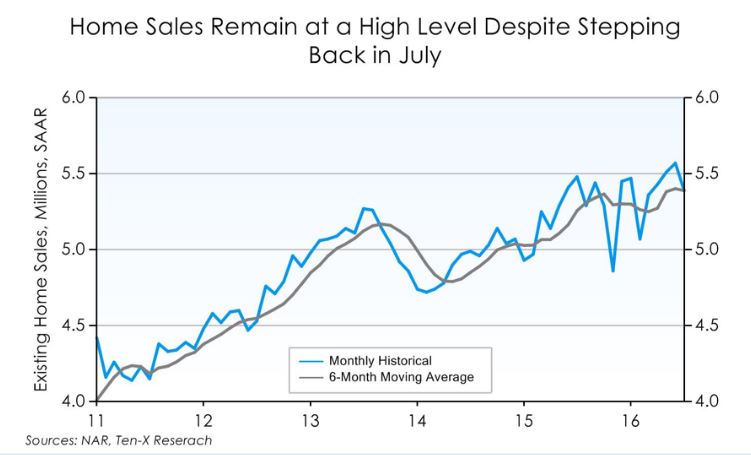 Previous: Overvalued Markets Not Necessarily a Bad Omen
Next: The Week Ahead: Congress is Back in Session