A brief on the National Mortgage Risk Index and other risk measures Monday from the American Enterprise Institute (AEI) International Center on Housing Risk revealed strong results for the housing market in August 2015 as mortgage credit loosened.

In the brief, Edward Pinto, resident fellow at AEI and Stephen Oliner, resident scholar at AEI and a senior fellow at the University of California, Los Angeles Ziman Center for Real Estate examined mortgage-related risk factors.

The data showed that mortgage credit loosened up in August 2015 compared to last year, with the National Mortgage Risk Index (NMRI) for Agency purchase loans reaching 12.14 percent in August, an increase of 1.0 percentage point from a year ago.

According to the brief, the First-time Buyer NMRI stood at 15.55 percent in August, up 1.3 percent from a year earlier, and also higher than the Repeat Primary Homebuyer NMRI of 9.63 percent.

First-time buyer credit standards are more lenient, as 70 percent had down payments lower than 5 percent in August, and 26 percent had debt-to-income ratios (DTIs) that exceeded the Qualified Mortgage (QM) limit of 43 percent. In addition, the median FICO score was 708, lower than the median score for all individuals in the U.S.

AEI also found the spring homebuying season showed strong results. Loan volume in August was up 14 percent from a year ago, with approximately 297,000 loans added in August, the highest monthly total since the series started.

First-time buyers added about 156,000 loans in August, an increase by nearly 20 percent from last year.

"The overall volume was buoyed by robust demand from first-time buyers, driven by
increasing leverage and an improving job market," the brief noted. 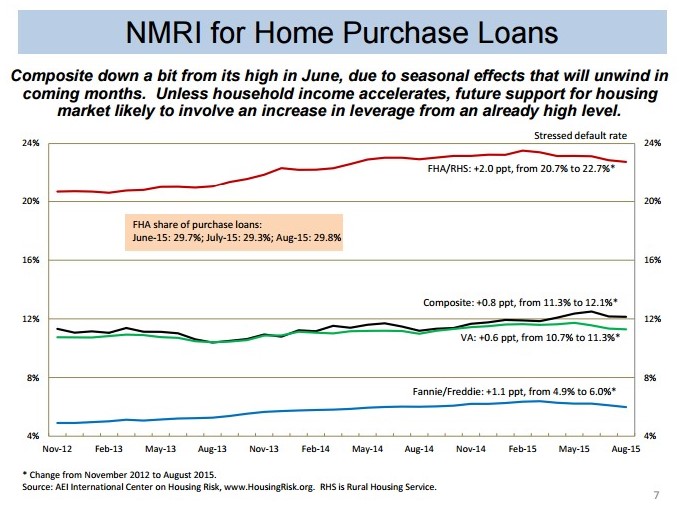 The market has favored sellers for 36 months consecutively due to historically low mortgage rates and high and growing leverage, the report stated.

These factors resulted in a 12.5 percent increase in home prices since the third quarter of 2012 trough, outpacing income growth and limiting affordability in the market.

Previous: Pending Home Sales Decline in August, but Remain Healthy
Next: Ocwen’s ‘B’ Rating is Affirmed, but Outlook is Negative Following Layoff Announcement