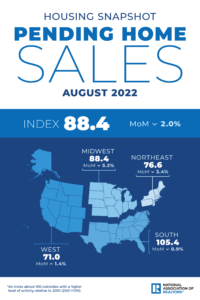 The Pending Home Sales Index (PHSI), which measures housing contract activity, again fell in August, the third month in a row and the ninth time it has fallen this year. In addition, three out of the four major regions in the country also reported declining numbers, as one region, the West, again posted a minor gain.

This information comes by way of the National Association of Realtors (NAR) who has been publishing this report since 2001. The index was benchmarked to 100 based on contract activity in 2001.

Yun expects the economy will remain “sluggish” throughout the remainder of this year, with mortgage rates rising to close to 7% in the coming months.

"Only when inflation calms down will we see mortgage rates begin to steady," said Yun.

Further, as a result of the current interest rate environment and weaker economic activity, the NAR expects existing-home sales to decline 15.2% in 2022, to 5.19 million units, while new home sales are projected to fall by 20.9%.

In 2023, Yun foresees slower price appreciation and corresponding increases in sales as the year progresses.

“U.S. pending-home sales for August were expected to fall 1.4% from July, but they came in 2% below the previous month and 24% lower than one year ago. Pending-home sales are a forward-looking indicator of home sales based on contract signings.”

“The steep decline in affordability has contracted housing demand, reducing the pace of sales. But there are also fewer existing homeowners listing their homes for sale, which further pinches the pace of sales. The rapidly cooling housing market is both a supply and demand story.”

“Housing is an interest rate-sensitive sector and the pending-home sales report is another sign that housing continues to slow. There are regional and market variations, but in aggregate sales are slowing, sellers and buyers are backing away, and price deceleration will follow suit. But, when the economic uncertainty dust settles and rates stabilize, those buyers and sellers who were on the sidelines will jump back in the housing game. Demographic trends support elevated purchase demand in the years to come.”

“The number of new pending sales declined 2.0% between July and August, as buyers faced higher rates and prices. Year-over-year, pending sales were down at double-digit rates across all regions of the country and continue to track below 2019 levels."

"As a result of both rising prices and escalating mortgage rates, the monthly payment for the typical homebuyer is now more than double what it was three years ago in some markets. Buyers are pulling out of contracts as financing falls through. The buyers who remain in the market are being more discerning, taking their time to look at properties and making offers that are below asking price."

"In the Mid-Atlantic region, for example, the average sold-to-list price ratio fell below 100% in August, the first time this ratio has been below 100% since January 2021. Homes are taking longer to sell, with the median days on market higher than it has been since early 2020. This means instead of deciding between multiple offers, sellers are seeing one or two offers and are accepting offers below their original asking price, likely with a number of buyer contingencies."

"It is clear that sellers need to modify their price expectations in this slower market environment, but it can be a slow adjustment. Among homes on the market last week in Washington D.C., for example, more than 60% of sellers had adjusted their price downward—and this share has been increasing throughout the summer.”

Click here for additional data, including regional breakdowns of data.

Previous: Pace of Refis Falls to 22-Year Low
Next: Volatile Mortgage Rates Cause More Than Stress