Interest rates on conventional purchase-money mortgages decreased from July to August, according to a index from the Federal Housing Finance Agency (FHFA).

The index, released Tuesday, showed interest rates have fallen from July to August on several levels. The national average contract mortgage rate for the purchase of previously occupied homes by combined lenders was 3.99 percent for loans closed at the end of August, down three basis points from 4.02 percent in July.

Additionally, the average interest rates on all mortgage loans for March declined two basis points from 4.01 recorded in July to 3.99 percent in August.

The FHFA also found the average interest rate on conventional, 30-year, fixed-rate mortgages in the amount of $417,000 or less was 4.20 percent, the same as July.

The effective interest rate on all mortgage loans, which accounts for the addition of initial fees and charges over the life of the mortgage was 4.15 percent in August, down two basis points from 4.17 percent in July. 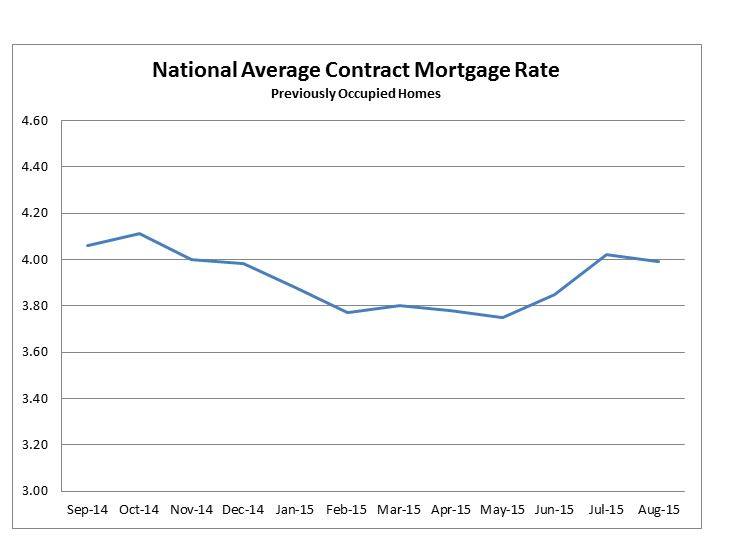 As interest rates continue to fluctuate without any help from the Federal Reserve, many wonder how a possible rate increase will affect the housing market.

Mark Fleming, chief economist at First American believes that the housing market will not be doomed by a rate increase, but will respond by adjusting to the changes.

“Of course, we cannot be sure exactly how mortgage rates and the housing market will respond to a Fed rate increase," Fleming said. "But, we can say with some certainty that the Fed will eventually raise rates."

He added, "When it does, the housing market isn’t doomed to fail, but rather adjust to the reality of interest rates that are reflective of a strengthening economy and certainly more traditional financial conditions."