The lower-than-expected labor market gains for September brought the average monthly job growth for the year down below 200,000.

While the national unemployment rate held steady at 5.1 percent from August (the U6 unemployment rate, the broadest measure of unemployment, fell 3 basis points to 10 percent), September saw a gain of just 142,000 jobs, bringing the average monthly total for the first nine months of 2015 down to 198,000, according to the September  2015 Employment Summary released by the Bureau of Labor Statistics (BLS). By comparison, average monthly job gains for the first nine months of 2014 totaled 260,000.

"This weak report is already influencing the long-term bond market, so mortgage rates will fall in response," said Jonathan Smoke, chief economist for Realtor.com. "The average 30-year conforming rate was down to 3.86 percent yesterday, and rates will be lower until strengthening economic trends are more evident. This summer’s home shoppers cited favorable interest rates as a top reason for being in the market for a home.” 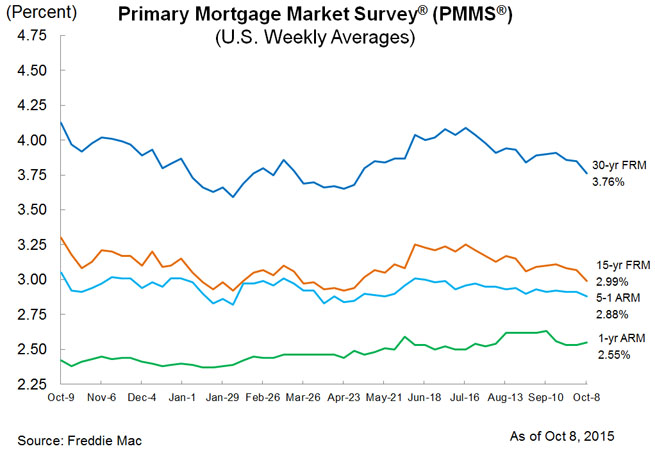 According to Freddie Mac's Primary Mortgage Market Survey (PMMS), this will be the 11th consecutive week that rates remained below 4 percent.

The 30-year fixed-rate mortgage (FRM) averaged 3.76 percent, with an average 0.6 point for the week. Last week, it averaged 3.85 percent and it averaged 4.19 percent last year, the report showed.

Meanwhile, the 15-year FRM fell below 3 percent at 2.99 percent, something it has not done since April. This rate averaged 3.07 percent last year and 3.36 percent a year ago.

"Calling the September jobs report disappointing is an understatement. The sputtering U.S. economy added only 142,000 jobs," said Sean Becketti, chief economist, Freddie Mac. "To make matters worse, there were downward revisions to the prior two months. Hourly wages were flat, and the labor force participation rate fell to 62.4 percent, the lowest rate since 1977. In response, Treasury yields dipped below 2 percent triggering a 9 basis point tumble in the 30-year mortgage rate to 3.76 percent."