Home >> Daily Dose >> Homeownership a ‘Sound Investment’ to Most Americans

Homeownership a ‘Sound Investment’ to Most Americans

Homeownership is on the minds of most Americans and despite rising prices, they still believe that purchasing a home is a good financial decision.

More than eight in 10 Americans believe that purchasing a home would benefit them financially while 68 percent indicated that now is a good time to jump in the market and purchase a home.

The 2015 National Housing Pulse Survey by the National Association of Realtors (NAR), which measures consumers' attitudes toward housing issues in the nation's 50 largest metros, found that 71 percent of Americans are sure they could sell their home for what they bought for, up 16 percentage points from 2013.

"Building equity, wanting a stable and safe environment, and having the freedom to choose their neighborhood remain the top three reasons to own a home," the report stated.

Renters that are considering buying a home now are not up to 39 percent from 36 percent in 2013, the report said. Owning a home was placed as a priority for 61 percent of survey respondents. 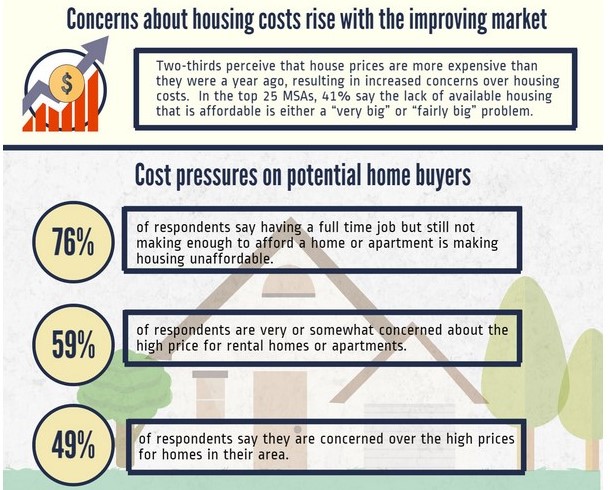 NAR also reported that housing market attitudes have gotten better in recent years, with 49 percent of Americans noting that they feel housing market activity has increase in the last year, up from 44 percent in 2013. Approximately 89 percent of those surveyed indicated that they expect home sales in their area to increase or stay the same.

"Homeownership is part of the American Dream, and this survey proves that dream is alive and thriving in our communities," said Chris Polychron, NAR president and executive broker with 1st Choice Realty in Hot Springs, Arkansas.

He added, "Realtors believe that anyone who is able and willing to assume the responsibilities of owning a home should have the opportunity to pursue that dream in a safe, responsible way, which is why NAR advocates homeownership issues and educating potential buyers about achieving their property investment goals."