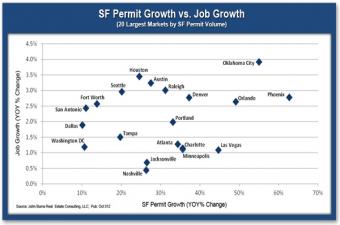 Report: Construction Improving Most in Southeast

Even construction activity seems to be bigger in Texas.

Six of the top 10 markets with the most single-family construction activity over the last year are located in Texas and the Southeast, according to a report from ""John Burns Real Estate Consulting"":http://www.realestateconsulting.com/.

""Tracking metro-level permit trends gives insight into which housing markets are growing and by how much,"" said Adam Artunian, senior research analyst for the company. ""Houston, driven by strong job growth, a growing population and an accommodating building environment, has seen more than twice the amount of permit activity than second-ranked Dallas.""

Meanwhile, while Phoenix trailed in third with 10,962 permits, it dominated the other metros in terms in year-over-year improvement, showing a 62.7 percent gain.

""Builders in Phoenix are scrambling to keep up with a recent surge in demand brought on by low resale supply, a surge in investor activity, rising prices, and strong job growth,"" Artunian said.

Conspicuously absent from the list of the top 20 markets was California. Artunian explained that most markets in the state are supply constrained with typically long lead times to open new communities. Riverside-San Bernardino, currently California's largest market for single-family construction, has actually seen negative permit growth, dropping to 26th in the rankings.

Because housing demand and employment are usually tied together, single-family permit growth has also meant job growth for many metros. Oklahoma City, Orlando, and Phoenix have all seen substantial employment growth (above 2.5 percent year-over-year) to match the rise in permits. On the other end of the spectrum, lackluster job growth has contributed to limited permit growth in the District of Columbia.

Some metros bucked the trend, though. Construction activity surged in Las Vegas and Jacksonville, both markets with relatively weak job growth.

""Even though the economy remains sluggish in these markets, considerable pent-up demand and improving housing fundamentals are spurring construction,"" Artunian said.

While construction activity is picking up greatly in some previously down markets, Artunian said ""strong increases in permits paired with shrunken construction employment are creating unpredictability, including spotty labor shortages in some markets.""