Home prices and risk are being driven up quicker than income by low mortgage rates, an improving labor market, and loose credit standards, but some believe this is not a sustainable approach to homeownership.

He added, “These gains have been fueled in part by liberalized credit standards, which is creating demand pressure and driving real home prices higher. This is not a firm foundation upon which to build sustainable homeownership.”

The Combined FBMSI, which measures the share of first-time buyers for both government-guaranteed and private-sector mortgages, reached approximately 52.8 percent, up from 51.0 percent last September, according to AEI.

In addition, the report also showed that the number of primary owner-occupied purchase mortgages going to first-time buyers in September totaled an estimated 155,000, up 20 percent from 129,000 in the prior year. 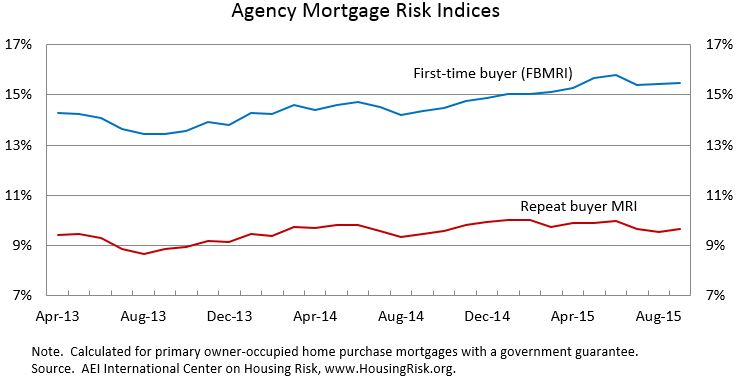 The First-Time Buyer Mortgage Risk Index (FBMRI) stood at 15.47 percent in September, up 1.1 percentage points from a year earlier. The index is also nearly 6 percentage points higher than the mortgage risk index for repeat homebuyers. "The higher risk for the mortgages taken out by first-time buyers is largely due to risk layering."

The report also found that 53 percent of first-time buyer loans were high risk (MRI above 12 percent) in September, up from 49 percent a year earlier.

“The typical first-time buyer today puts little money down and chooses a mortgage that pays off very slowly,” said Oliner. “This combination means that many first-time buyers are only one recession away from being significantly underwater.”