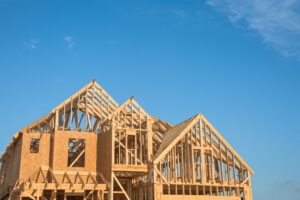 Data analyzed by the U.S. Census Bureau and the U.S. Department of Housing and Urban Development (HUD) for September 2022 on the nation’s new residential construction statistics found privately‐owned housing starts at a seasonally adjusted annual rate of 1,439,000, which is 8.1% below the revised August estimate of 1,566,000, and 7.7% below the September 2021 rate of 1,559,000. Single‐family housing starts in September were at a rate of 892,000–4.7% below the revised August figure of 936,000. The September rate for units in buildings with five units or more was 530,000.

“The number of single-family homes under construction remains near all-time highs, hampered by labor shortages and high construction material costs,” said First American Deputy Chief Economist Odeta Kushi. “Single-family permits and starts are leading indicators of new housing inventory in the pipeline so, as they decline, builders will have the opportunity to chip away at the backlog of homes in the pipeline.”

The National Association of Home Builders (NAHB) reported that builder confidence in the market for newly built single-family homes dropped eight points in October to 38—half the level it was just six months ago—marking the lowest confidence reading since August of 2012 (with the exception of the onset of the pandemic in the spring of 2020).

“This will be the first year since 2011 to see a decline for single-family starts,” said NAHB Chief Economist Robert Dietz. “And given expectations for ongoing elevated interest rates due to actions by the Federal Reserve, 2023 is forecasted to see additional single-family building declines as the housing contraction continues. While some analysts have suggested that the housing market is now more ‘balanced,’ the truth is that the homeownership rate will decline in the quarters ahead as higher interest rates and ongoing elevated construction costs continue to price out a large number of prospective buyers.”

In addition to the rise in rates, further impacting September housing totals was Hurricane Ian making landfall, marking the costliest Florida storm since Hurricane Andrew made landfall in 1992. Updated estimates from CoreLogic of the damage and loss totals from last week’s Hurricane Ian conclude that total flood and wind losses will total between $41 billion and $70 billion. This estimate includes wind loss, re-evaluated insured and uninsured storm surge loss and newly calculated inland flood loss for residential and commercial properties.

“Additionally, this report again suggested that builders are working through their construction backlogs as single-family completions outpaced starts for the third consecutive month, causing the number of single-family homes under construction to decrease to the lowest level since February,” said Douglas G. Duncan, Chief Economist at Fannie Mae. “Given how dramatically housing demand has fallen due to the rapid run-up in mortgage rates, we expect builders to begin offering more aggressive incentives to move their now-growing inventory of completed homes for sale. If true, we believe this dynamic would likely cause new home sales to be resilient relative to existing-home sales in the near-term.”

Mortgage rates edged closer to the 7% mark last week, as Freddie Mac reported the 30-year fixed-rate mortgage (FRM) at 6.92%, a 20-year high. And today, the Mortgage Bankers Association (MBA) reported that mortgage applications are now into their fourth month of decline, slipping 4.5% week-over-week.

“Higher mortgage rates result in lower house-buying power, which reduces affordability, all else held equal. Holding household income constant, an increase in the 30-year, fixed mortgage rate from 6% to 7% reduces house-buying power by approximately $35,000,” added Kushi. “The new-home market is very rate-sensitive and builders will respond to the decline in affordability and cooling demand by building less. While there remains a structural and long-term shortage of housing, the pullback in demand and ongoing supply-side headwinds has builders spooked.”