According to the FHFA, the average interest rate on all mortgage loans was 3.95 percent, down four basis points from 3.99 percent in August.

The National Average Contract Mortgage Rate for the Purchase of Previously Occupied Homes by Combined Lenders Index was 3.93 percent, down six basis points from 3.99 percent in August, the report showed.

The effective interest rate, which accounts for the addition of initial fees and charges over the life of the mortgage, was 4.10 percent, down five basis points from August. 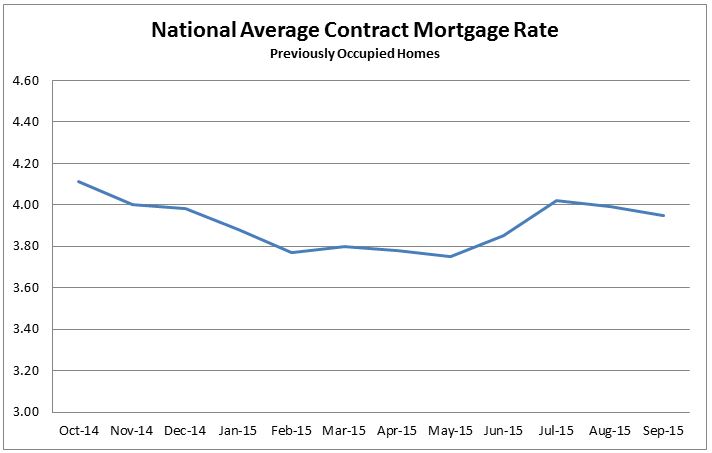 According to the survey, the 30-year fixed-rate mortgage (FRM) averaged 3.76 percent with an average 0.6 point for the week,  down from last week's average of 3.79 percent. The 30-year FRM averaged 3.98 percent on year ago at this time.

"Treasury yields oscillated without a clear direction heading into the October FOMC meeting, as investors were confident there would be no rate increase," said Sean Becketti, chief economist, Freddie Mac. "While the FOMC left rates unchanged at this meeting, they kept a December rate hike as an option causing Treasuries to sell off in the latter part of the day, after our survey closed."

He added, "Recent housing reports have done little to add or detract from the possibility of a December rate increase. Existing home sales were strong, contrasting with disappointing new home sales."

Previous: The Two Faces of the American Dream
Next: The MReport Webcast: Friday 10/30/2015