The data showed that purchase loans increased 11 percent year-over-year in the third quarter, while purchase originations were 15 percent higher in the second quarter of 2015 compared to the prior year. In addition, in June 2015, purchase lending reached its highest point since June 2007.

“The increase in purchase originations is being driven entirely by high-credit borrowers,” the report stated.

Meanwhile, only 20 percent of purchase loans in the past three months have gone to borrowers with a <700 credit score, the lowest level in over 10 years.

On the other hand, in the third quarter, compared to a year ago, purchase loans have fallen 5 percent, the report found. In the second quarter 2015 purchase origination volumes from sub-700 credit score borrowers were flat compared to last year. 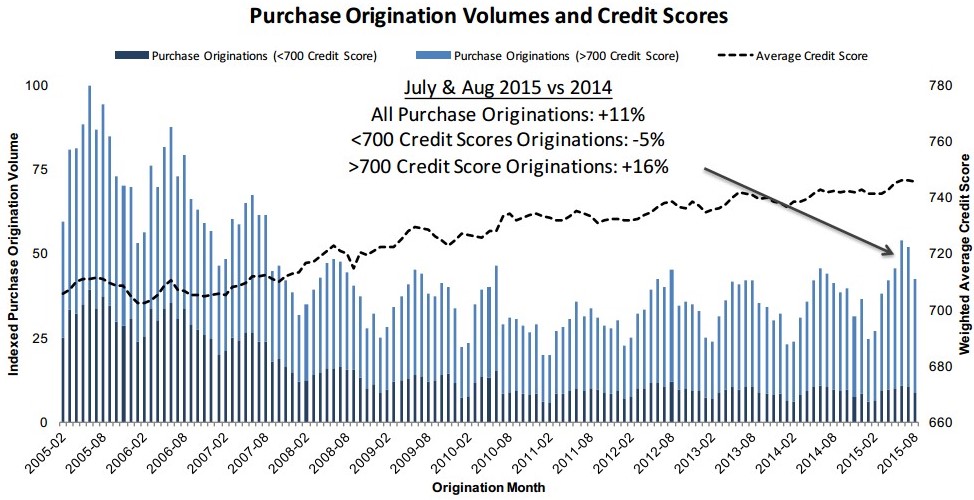 “This decline signals a degree of ‘burnout,’ as those both interested in and able to take advantage of currently low interest rates have likely already refinanced,” the report said. “The recent reduction in average credit score, which at first glance gives the false impression of loosening credit, is actually being driven by a decrease in high credit score refinance volume while lower credit score volume has remained unchanged.”

As far as adjustable rate mortgages (ARM) are concerned, this share remains near 5 percent, but before the housing boom in 2004 to 2007, a 5-10 percent ARM share was considered normal activity, the data showed.

In today’s market, 5.7 million outstanding ARMs exist, the lowest number since the first quarter of 2003 and a 57 percent decrease since 2006, which Black Knight says is “limiting the market impact of increasing interest rates.”