[1]Mortgage interest rates rose for the second consecutive week following a strong October jobs report and a slight jump in wage growth, which pushed Treasury yields up and increased chances for a December rate hike from the Federal Reserve.

Freddie Mac's Primary Mortgage Market Survey [2] (PMMS) showed that the 30-year fixed-rate mortgage (FRM) averaged 3.98 percent with an average 0.6 point for the week ending November 12, 2015. This was the highest since July. Last week the rate averaged 3.87 percent and a year ago, the 30-year FRM averaged 4.01 percent.

According to the survey, the 15-year FRM averaged 3.20 percent with an average 0.6 point this week. This rate is up from last week when it averaged 3.09 percent and it was 3.20 percent a year ago during this time.

The 5-year Treasury-indexed hybrid adjustable-rate mortgage (ARM) averaged 3.03 percent this week with an average 0.4 point, up from last week when it averaged 2.96 percent, the report stated. A year ago, the 5-year ARM averaged 3.02 percent. 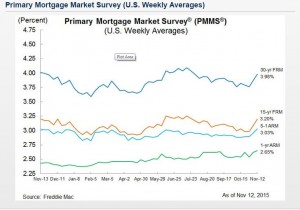 He added,"There is only one more employment report before the December FOMC meeting, which will have major implications on whether we see a rate hike in 2015."

Freddie Mac also announced: "As of January 1, 2016, the PMMS will no longer provide results for the 1-year ARM or the regional breakouts for the 30-year and 15-year fixed rate mortgages, or the 5/1 Hybrid ARM."