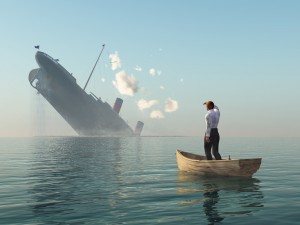 The stormy days of the housing meltdown may have passed, but is it all calm waters ahead? The industry’s top economists foresee some unpredictable tides as 2016 approaches.

Many homeowners during the downturn must have felt like Tom Hanks’ character in Cast Away. Trapped as the water rose up around them, with little in the ways of help or hope. The housing sector has come a long way in the full decade since home prices began their initial decline.

“Real residential investment has vastly outperformed the overall U.S. economy by recording growth rates of 10.1 and 6.6 percent in the first and second quarters of 2015, respectively,” said Anthony Chan, JPMorgan Chase’s chief economist. “This compares favorably with U.S. real GDP growth over the same period of just 0.6 and 2.3 percent.”

The NAR Homebuilders Housing Market Index (HMI) recently achieved its highest reading since October 2005. Fueling further optimism in the sector was the report by the U.S. Census Bureau and the HUD that housing starts in July climbed to their highest level in nearly eight years.

Frank Nothaft, SVP and chief economist at CoreLogic, expects close to 3 million new jobs in the coming year, mortgage rates to stay low “but higher than they are today,” and consumer confidence to remain solid. “Based on this backdrop, home sales are projected to rise about 5 percent in 2016, and the CoreLogic national Home Price Index™ is forecast to appreciate 4 to 5 percent.”

Confidence Game
Consumers are more confident when they have jobs, and that’s when the housing market hums. The JPMorgan Chase and Fannie Mae economists both pointed to job creation as a key indicator of the health of not only the mortgage market, but also the economy as a whole. As for the latter, both also emphasized the importance of consumer spending, which accounts for approximately two-thirds of all economic activity.

“We believe the health of consumers is key to the economy and the housing market,” Duncan said. “Indicators that fundamentally impact consumers include job creation, wage and salary income, and consumer confidence.”
Chan said there is little doubt that holding a job, in addition to good credit, is a “crucial prerequisite” for securing a mortgage when purchasing a home.

“The unemployment rate has plunged from a high of 10.0 percent to a current reading of 5.3 percent as U.S. job openings have surged to record levels,” he said. “Interestingly, our analysis reveals that both U.S. consumer confidence and the HMI tend to exhibit a high correlation, indicating that a healthy housing market is usually accompanied by strong consumer spending growth.”

Approximately 3.1 million non-farm payroll jobs were created in 2014 with at least 2.5 million jobs to be delivered this year, according to Chase’s chief economist, who explained the drop off as the natural tightening of the labor markets.

Of course, interest rates always get a lot of attention, from first-time homebuyers to veteran residential developers and beyond. The Fed’s much talked about re-tightening of fiscal policy, which would be its first interest rate increase since 2006, would increase the cost of borrowing money to buy a house.

Duncan said, “We expect mortgage rates to increase only gradually over the next year given ongoing international uncertainties, continued monetary easing around the globe and an expected slow pace of monetary tightening by the Fed.”

Fannie Mae’s chief economist added that, if the Fed raises rates as expected, foreign institutions could seek to profit from any carry trade and create capital flows into U.S. capital markets, which would hold long-term rates down and increase refinance volumes. He keeps a close eye on indicators directly tied to that spending, such as personal consumption expenditures, retail, and auto sales.

“I would say housing is not doing as well as the car market, but a lot better than the labor market,” said Dean Baker, co-founder of The Center for Economic and Policy Research (CEPR). “If job growth continues at near its current pace, then we will probably start to see some real wage gains by the end of the year or early next year.”

The Long & Winding Path to Recovery
For all of the slow and sluggish descriptions, the housing market recovery might as well be an economic tortoise. As in Aesop’s fable, all’s well that ends well, right?

“Although the recovery in the U.S. housing market has been sluggish from its trough in April 2009, the recovery is real as evidenced by a 466 percent construction surge in multifamily homes and a near doubling for single-family homes,” Chan said.

Calling it a “gradual recovery,” Fannie Mae’s Duncan pointed out that most housing indicators, including homebuilder confidence, existing home sales, and single-family starts, have returned to pre-crisis levels with the exception of new home sales.

Joseph Murin, JJAM Financial Services Chairman and former president of Ginnie Mae added, “We’ll be watching the percentage of first-time homebuyers. They’re the lifeblood of the mortgage and real estate industry, and they haven’t been there for a few years.”

CEPR’s Baker described the sector as “near normal,” citing vacancy rates that have fallen sharply. “Prices have fully rebounded to their trend levels or perhaps a bit above,” he added. “The rate of foreclosure is still high, but much closer to trend levels than to recession peaks.”

“Single-family home building has been disappointing this year, constrained by a lack of skilled labor and tight standards for AD&C (acquisition, development, and construction) lending,” Duncan said. “While household formation has picked up since late 2014, all of the net gain in households over the past year was due to renters.”

Chan said, “Undoubtedly, much of the [household formation] increase has gone to rentals, which now account for nearly 35 percent of new construction compared to a figure of 20 percent prior to the last recession. The rise in activity has still benefited the traditional single-family home sector, too.”

CoreLogic’s Nothaft added to Duncan’s point about lenders’ tightening of credit standards: “Underwriting has been tighter than 15 or 20 years ago and may have slowed the single-family recovery.”

What hasn’t benefited the housing sector is wage stagnation. That naturally affects consumer spending, which, as mentioned above, constitutes such a huge chunk of economic activity. Stagnation doesn’t exactly go hand and hand with the traditional home-buying line about the “biggest purchase you’ll ever make.” Duncan reported that annual earnings show no sign of breaking out of the 1.8 to 2.2 percent growth range exhibited during the past three years, compared with more than 3.0 percent gains that were typical prior to the recession.

Gallup reported that consumer spending in this country showed little movement between 2009 and 2012. The figure began to rise in late 2012 and continued to do so into 2013. Since then, it has hovered at that same level 25 to 28 percent above the post-recession plateau.

With an allusion to two much older real estate markets, Nothaft called the recovery “a tale of two tracks.” Rental housing was the first sector to recover coming out of the Great Recession and, on the strength of the prime millennial consumer segment, has remained robust.

“Nationally, rental vacancy rates are at their lowest level since the 1980s, and apartment rental construction is at its highest pace in over a quarter century,” he said. “The other tale, however, is the sluggish recovery of single-family and first-time buyers. Single-family construction remains depressed, home-sales turnover remains low, and the homeownership rate has fallen to a 40-year low. Single-family activity levels are at least two years away from resembling a normal pace.”

The economy is a global one, as U.S. stock market investors were reminded this past summer during China’s economic slowdown and devaluation of its currency. Oil prices and the strength of the dollar can have major economic effects that ripple through the housing sector.

“International developments threaten to slow the already modest pace of U.S. economic growth,” said Duncan of Fannie Mae. “They have also raised challenges to the Fed’s plan to raise rates for the first time in nine years.”

What’s Next?
There is very little sense of a sugar rush-type mania to the current housing market. Chastened by the sector’s past sins and guided by—or hassled depending on whose perspective one might get—new safeguards such as the CFPB, the housing market appears, for the most part, to chart a bubble-free course.

“With prospective homeowners undergoing stricter vetting procedures prior to securing a mortgage, we believe that the increase in housing activity is on much more solid ground today than it was in the prior housing market expansion,” Chan said. “With jobs continuing to be created at a healthy clip and housing prices rising by 4.4 percent according to the Case-Shiller Home Price Index, prospective homebuyers should feel comfortable that such prices are greatly exceeding the yearly rise in the Consumer Price Index, currently rising by just 0.2 percent.”

Nothaft predicts 30-year fixed-rate loan rates to hover between 4 and 4.25 percent around year’s end. Don’t be fooled by flat fourth quarter national home price indexes that are not seasonally adjusted. “Household formations will top a million and be at the best pace since before the Great Recession, keeping rental markets tight,” he added.

Previous: How the Industry Will Get eClosing Wrong
Next: LoanDepot Pulls IPO On Eve of Offering

About Author: Brian A. Lee

Brian A. Lee is an Atlanta-based freelance writer and former editor of Western Real Estate Business magazine. Although a big fan of mortgage and housing content, the Wake Forest and University of Georgia graduate considers his top moment in journalism a one-on-one interview with baseball legend Hank Aaron in 2009.