Construction in the single-family housing market for the month of October as both housing starts and housing completions decreased, the U.S. Census Bureau and HUD announced Wednesday.

Residential construction data for October 2015 showed that single-family housing starts reached a rate of 722,000 in October, down 2.4 percent from September's revised number of 740,000. For buildings with five units or more, starts were at a rate of 327,000.

"The steady increase in residential starts in 2015 has produced a steady increase in the number of homes under construction although carrying them through to completion slowed a bit as labor shortages, especially finishing carpenters, slow the ability to get finishing touches done," said David Crowe, NAHB Chief Economist and SVP.

Realtor.com Chief Economist Jonathan Smoke noted that the housing industry needs stronger growth in construction and that the picture will only worsen if this negative trend continues.

"At our current pace of activity and taking into account loss of housing stock due to disaster and dilapidation, we're building new units at less than half the pace at which we are forming households," Smoke said. The housing shortage only worsens if this remains the picture. Tight supply of homes for sale and low vacancies will continue to be the norm, and along with that, higher rents and prices." 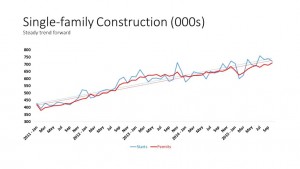 "Today’s report signals more strength than last month’s as the level of permits is higher than starts (1.15 million vs. 1.06 million)," Smoke explained. "Permits by definition lead starts, so the pace of permit activity slowing to a level lower than the pace of starts signals a declining market. The decline in starts and completions this month is the result of that scenario last month."

NAHB Chairman Tom Woods and a home builder from Blue Springs, Missouri is optimistic about the Bureau/HUD data.

"The fact that permits are rising is consistent with our builders’ continued optimism in the housing market. Even though starts dropped in October, they have stayed above the one million mark for seven straight months—the longest streak in almost seven years," he said.

Crowe concluded that the October data will not affect their previous forecast for "continued modest growth in 2015 and some slight acceleration in single-family construction in 2016 as the economy grows, jobs are added and mortgage rates remain relatively low."