The share of cash sales in the housing market continues to decline, with the primary cause pointed at the decrease in REO properties.

At their peak in January 2011, cash sales accounted for nearly half of all residential home sales in the United States (46.5 percent), CoreLogic noted. Since then, that percentage has steadily declined.

However, before the crisis, cash sales averaged about one-fourth of all home sales, and at this rate, CoreLogic projects that this share should hit 25 percent once again by mid-2017.

As has been the historical trend, REO sales made up the largest share of cash transactions at 57.9 percent in August 2015, followed by resales (31.1 percent), short sales (29 percent), and new home sales (15.5 percent), the report showed. 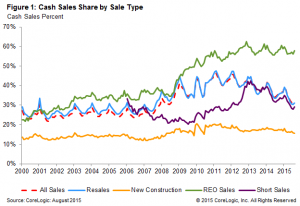 "Distressed sales (REO and short sales) typically sell at a price discount, with REO selling at the steeper discount," CoreLogic Chief Economist Frank Nothaft said. "The discounts are attractive to investors, who can buy with less cash than if the house sold at full/market price, as would generally be the case with a resale or new construction.  Thus, the drop in REO sales is a primary cause of the declining cash share."

Investors typically make up the largest share of all-cash buyers, but their share of all home sales is also declining.

“It’s also true that investors are buying a smaller share of all homes, but that may be related to the decline in REO inventory on the for-sale market,” Nothaft said.

In some of the nation’s largest metro areas, the cash sales share was more than half: Miami (51.7 percent) had the highest, followed by Philadelphia (51 percent), West Palm Beach (50.8 percent), North Port-Sarasota-Bradenton, Florida (48.5 percent), and Fort Lauderdale (47.7 percent). 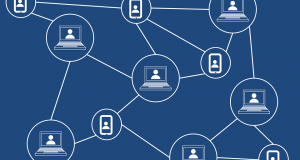