Even with the housing market slowing down due to seasonality, home prices still showed year-over-year gains in September, and are even rising twice as fast as inflation.

Home prices rose 4.9 percent over the last 12 months in September 2015, up from the 4.6 percent increase in August 2015, according to the S&P/Case-Shiller Home Price Indices (HPI) released Tuesday.

“Home prices and housing continue to show strength with home prices rising at more than double the rate of inflation,” said David M. Blitzer, Managing Director and Chairman of the Index Committee at S&P Dow Jones Indices. “The general economy appeared to slow slightly earlier in the fall, but is now showing renewed strength. 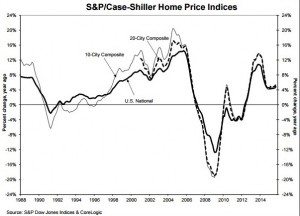 The indices determined that the national HPI rose 3 percent from September 2014 to September 2015 after adjusted for the CPI core rate of inflation.

Among the 20 cities with double-digit increases, San Francisco, California (11.2 percent), Denver, Colorado(10.9 percent), and Portland, Oregon (10.1 percent) had the highest year-over-year gains in home prices. In addition, the report showed that 17 cities had higher price increases in the year ending September 2015 compared to the year ending August 2015.

“The strength seen in home prices since the bottom in 2012 led some to wonder if we’re entering a new bubble," Blitzer noted. "While bubbles can only be reliably identified in hindsight, one useful measure compares the increase in home prices to the change in rents."

He continued, “Another question raised by consistent real (or inflation adjusted) home price increases is whether the prices are squeezing people out of the market...affordability is more than adequate for a median income buyer now but has slipped a bit recently.”

Blitzer also touched on the highly anticipated Fed rate hike, noting that most analyst expect the Fed to raise its Fed Funds target range to 25 to 50 basis points. This will mark the first increase in nine years.

"While this will make news, it is not likely to push mortgage rates far above the recent level of 4 percent on 30 year conventional loans," Blitzer explained. "In the last year, mortgage rates have moved in a narrow range as home prices have risen; it will take much more from the Fed to slow home price gains."

Previous: The MReport Webcast: Tuesday 11/24/2015
Next: Mortgage Interest Rates Fall in October With No Help From the Fed