According to the FHFA, the National Average Contract Mortgage Rate for the Purchase of Previously Occupied Homes by Combined Lenders Index reached 3.89 percent in October, down 4 basis points from 3.93 percent in September.

The FHFA found that the effective interest rate on all mortgage loans was 4.04 percent in October, down 6 basis points from September. Meanwhile, the average loan in October amounted to $308,600, up from $307,700 in September. 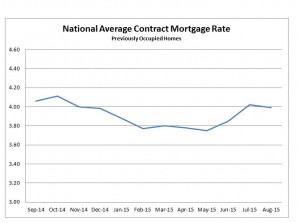 Zillow Mortgages also reported a similar, but much lower trend, with the 30-year fixed mortgage rate ringing in at 3.75 percent as of Tuesday this week. This number is down four basis points from last Tuesday. Meanwhile, the 15-year fixed-rate is now 2.93 percent, and a 5-1 adjustable-rate mortgage (ARM) rate is 2.92 percent.

But those within the mortgage industry and consumers should beware because these historically low mortgage rates may not last very much longer.

The elusive interest rate hike that the mortgage industry has anticipated for quite some time may finally happen in December 2015.

After convening in late October in their second-to-last meeting of the year, the Federal Open Market Committee (FOMC) placed yet another hold on the rate hike, leaving the federal funds rate at the current 0 to 1/4 percent target range.

This decision left one question on everyone's mind in the mortgage industry: When will the Fed raise rates? But the answer to this question may come next month, pending that economic data proves to be promising.

Minutes from the FOMC's October meeting showed that most of the members appear to be on-board for a December rate increase.

"Most participants anticipated that, based on their assessment of the current economic situation and their outlook for economic activity, the labor market, and inflation, these conditions could well be met by the time of the next meeting," the minutes explained.

One of the key pieces of information that was presented in the FOMC's minutes was the fact that members alluded to a rate hike at their "next meeting."

"Members emphasized that this change was intended to convey the sense that, while no decision had been made, it may well become appropriate to initiate the normalization process at the next meeting, provided that unanticipated shocks do not adversely affect the economic outlook and that incoming data support the expectation that labor market conditions will continue to improve and that inflation will return to the Committee’s 2 percent objective over the medium term," the minutes said.