The total amount of debt outstanding among students has risen from $364 billion to $1.2 trillion over the last ten years, and the number of borrowers (ages 18 to 30) with a student loan has increased from 27 percent to 40 percent during the same time period.

So how adversely does student debt affect consumers' ability to get a mortgage loan?

"The sharp rise in student loan debt has raised concerns that young people with a lot of student debt may be having trouble getting a mortgage or other types of loans," the report said.

According to the report, as the percentage of 18 to 30-year-olds with student loan debt rose over the last ten years, those with a mortgage declined. Prior to the recession, 11 percent of young consumers had a mortgage, but now this number stands at 7 percent.

"While the total number of mortgages has declined for most age groups, part of the drop in young people’s mortgage borrowing may be due to an increase in the number of people with student loans, the report stated. 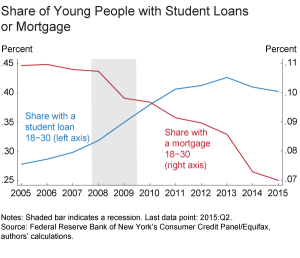 "While it’s unlikely that student loans are the sole factor for the decline in mortgage borrowing across the United States, it is hard to ignore how the recent surge in student loan debt is changing the debt portfolio of young borrowers," the report noted.

"With over 40 percent of young borrowers having a student loan, and debt payments comprising 20 percent of their income, it makes it more and more difficult for young people to take on a mortgage in the first few years after attending college. And as the number of student loans continues to rise, it is a trend that is likely to continue."

Previous: Fed Tightens Up on “Too Big to Fail”
Next: The Collingwood Group Chairman Debates Fed Rate Hike