The National Association of Realtors (NAR) Pending Home Sales Index (PHSI) showed that pending home sales increased 0.2 percent to 107.7 in October, up from September's number of 107.5. The index is up 3.9 percent year-over-year from 103.7 last October.

NAR Chief Economist Lawrence Yun believes pending home sales have been restrained in the fall season as "buyers struggle to overcome a scant number of available homes for sale and prices that are rising too fast in some markets."

Yun also noted that the growing strength among several job markets has increased demand for purchasing homes, which has kept existing-home sales over 5 million for eight consecutive months.

"Areas that are heavily reliant on oil-related jobs are the exception and have already started to see some softness in sales because of declining energy prices," Yun explained.

If demand continues on a stable path, Yun projects that existing-home sales will reach 5.30 million for the 2015 year, the highest pace since 2006.

"Unless sizeable supply gains occur for new and existing homes, prices and rents will continue to exceed wages into next year and hamstring a large pool of potential buyers trying to buy a home," Yun added. 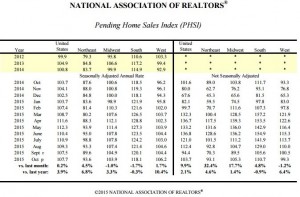 Meanwhile, in the Midwest, the index fell 1.0 percent to 103.9 in October, but remains 3.3 percent above October of last year, the NAR reported. In the Southern region, pending home sales declined 1.7 percent to an index of 118.1 in October, down 0.3 percent from last year.

"Contract signings in October made the most strides in the Northeast, which hasn't seen much of the drastic price appreciation and supply constraints that are occurring in other parts of the country," Yun noted. "In the most competitive metro areas–particularly those in the South and West–affordability concerns remain heightened as low inventory continues to drive up prices."