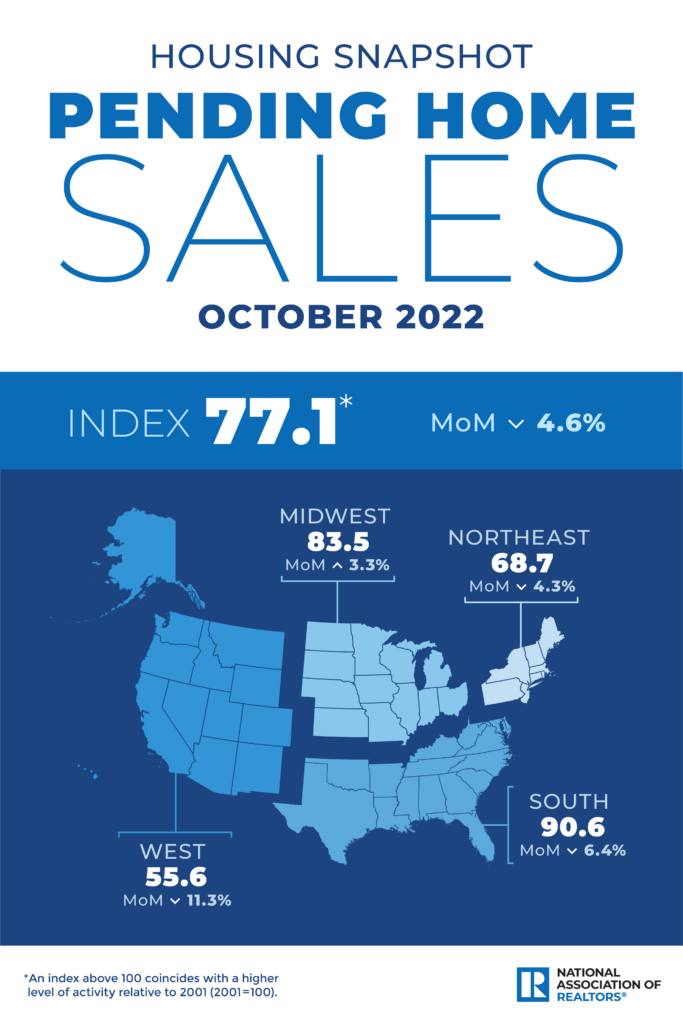 Pending home sales slid for the fifth consecutive month in October, according to the National Association of Realtors (NAR), down 4.6% from September 2022’s reported findings, as three of four U.S. regions recorded month-over-month decreases, and all four regions recorded year-over-year declines in transactions.

NAR’s defines a pending home sale as a sale listed as pending when the contract has been signed, but the transaction has not closed, though the sale usually is finalized within one or two months of signing.

"October was a difficult month for home buyers as they faced 20-year-high mortgage rates," said NAR Chief Economist Lawrence Yun. "The West region, in particular, suffered from the combination of high interest rates and expensive home prices. Only the Midwest squeaked out a gain."

Freddie Mac reported on October 27 that the 30-year fixed-rate mortgage (FRM) surpassed the 7% mark, when it averaged 7.08%.

“October was a tough month for home buyers, as mortgage rates hit the highest level in over two decades,” said First American Deputy Chief Economist Odeta Kushi. “However, mortgage applications data thus far in November point to home buyers returning to the market as rates have recently slipped from their peaks in October.”

The correlation between the dip in sales and affordability continues, as high rates, inflationary concerns, and high prices have forced many to reconsider a home purchase in the current market.

“Since October, mortgage rates have subsided, dropping half a percentage point from their recent peak of 7.08%,” said Realtor.com Economic Data Analyst Hannah Jones. “Still, at the current, below-peak, rate of 6.58%, financing 80% of a median-priced home purchase would mean a monthly payment roughly $900 higher than just one year ago. This reprieve in mortgage rates may be short-lived depending on upcoming inflation data. The Fed remains committed to their 2% inflation target, meaning more rate hikes are likely, though the magnitude of the hikes will depend on incoming CPI data.”

As the Federal Reserve continues to make adjustments to curb the nation’s inflationary concerns, the ripple effects on the mortgage market have resulted in a dip in rates over the past few weeks and a rise in mortgage application volume. Last week, the Mortgage Bankers Association (MBA) reported that overall mortgage application volume was up 2.2% week-over-week, as Freddie Mac reported that the 30-year FRM dropped to 6.58%.

Jones added, “Typically, as the weather cools off from summer highs, so do home prices. In October, prices were down almost $25,000 from the summer’s peak, though still up compared to last year. Buyers who are able to contend with higher rates may enjoy more inventory, more price reductions, and less competition for the remainder of the season. Homeowners hoping to sell before the year is up may have to exercise flexibility in negotiations to keep buyers interested.”

Are there signs of life being pumped back into the housing market after several months of decline?

“The housing industry is not through the storm yet,” added Kushi. “Rates will remain high and could even move higher until there is sustained evidence that inflation is receding. Higher mortgage rates keep buyers and sellers on the sidelines. The regional and market variations are telling. Yearly and monthly declines in pending-home sales were most severe in the West (-46.2%). West coast markets are also where we are seeing the fastest house price deceleration.”