Home prices continued to keep their rising pace in October 2015 with the help of declining housing supply and increasing consumer demand.

The HPI report also noted that nationally, single-family home prices are 6.8 percent below the peak recorded in April 2006. CoreLogic believes home prices in this sector will reach a new peak in April 2017.

“Many markets have experienced a low inventory of homes for sale along with strong buyer demand, which is sustaining upward pressure on home prices. These conditions are likely to persist as we enter 2016,” said Dr. Frank Nothaft, chief economist for CoreLogic. 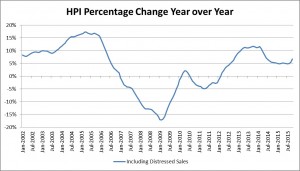 “The rise in home prices over the past few years has largely been a healthy trend. The shadow inventory has been reduced significantly and home equity levels are now approaching pre-recession levels,” said Anand Nallathambi, president and CEO of CoreLogic. “As we move forward, the rise in home prices will need to be better correlated to family income trends over time to avoid homes becoming unaffordable for many. This is especially true in several metropolitan areas where home prices have grown rapidly.”