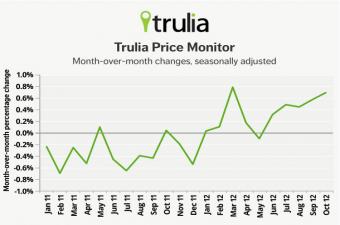 Asking prices on for-sale homes rose in November at a breakneck pace, but the gap between certain markets is growing more pronounced, according to ""Trulia's"":http://www.trulia.com/ latest ""Price Monitor"":http://info.trulia.com/trulia-price-and-rent-monitor.

Asking home prices rose a seasonally adjusted 0.8 percent from October to November, suggesting an annualized growth rate of 10 percent, Trulia reports. Prices were strong by all other measures, as well, increasing 3.8 percent year-over-year (the largest annual increase to date) and 2.2 percent quarter-over-quarter (a post-crisis high). Even without adjusting for the typically slow post-summer months, prices were up 0.8 percent quarter-over-quarter.

""Prices are rising faster than at any point since the bubble burst, but the price recovery is becoming more uneven,"" said Trulia chief economist Jed Kolko. ""Even though prices rose at a 10 percent annualized rate in the last quarter, more metros are seeing price declines. The price recovery is strongest in the largest metros, and price gains have now surpassed rent gains in the largest 25 rental markets. However, price gains are starting to waver in smaller markets.""

Indeed, even as the recovery in national prices accelerated in November, the number of metros reporting quarter-over-quarter price increases fell, dropping to 70 from 79 in August. The disparity is attributed to uneven price spreads across metros.

According to a ""blog post"":http://trends.truliablog.com/2012/12/trulia-price-rent-monitors-nov-2012/ written by Kolko, the largest metros--the top 25 out of the 100 tracked by Trulia--have had, on average, larger annual and quarterly price increases than other large metros. For example, the top 25 metros posted an average 5.4 percent increase year-over-year and a 2.4 percent increase quarter over quarter, while the bottom 25 markets saw smaller gains of 1.3 percent (year-over-year) and 0.7 percent (quarter-over-quarter).

Out of the top 10 metros with the largest quarterly asking price gains, Salt Lake City topped the list, reporting an increase of 7.8 percent. More notable, though, were the large quarterly gains in Atlanta, Riverside-San Bernardino, and Sacramento--three areas that saw the worst of the impact when the housing crisis began.

""Unlike other hard-hit metros such as Phoenix, Las Vegas, and Miami, prices in these metros have been slower to bounce back, declining in February and making smaller gains in August and May,"" Trulia said in a release.

Also of note is the fact that while national rents rose at a greater pace than prices (5.6 percent year-over-year), improvements in asking prices actually outpaced improvements in rent in 14 of the 25 largest rental markets. Denver, Seattle, and San Francisco--three of the top 10 metros in terms of rent increases--all posted larger gains in prices than they did in rent.

""That means in most of the largest rental markets, homeownership is getting less affordable relative to renting,"" Kolko noted.