Home >> Daily Dose >> Buyers vs. Sellers: Who has the Advantage?

Buyers vs. Sellers: Who has the Advantage?

This year has been dubbed as one the best in terms of home prices and sales, especially during the spring and summer seasons. One competition that has been in the balance for all eternity is the contest between buyers and sellers.

A recent survey from Redfin showed that home sellers are losing a bit of their ground in the housing market in the fourth quarter of 2015, therefore placing the advantage in the hands of buyers.

The survey, which questioned 900 Redfin agents all over the nation in November, showed that only 6.3 percent indicated that sellers had all the power in the housing market in the fourth quarter, a huge drop from 35.5 percent in the first quarter 2015. 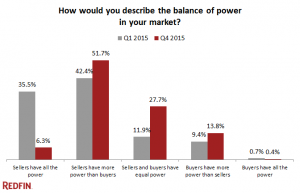 Even more surprising is the number of Redfin agents that believe that power in the market is evenly distributed among buyers and sellers, with 27.7 percent indicating that market power is even, more than double the 11.9 percent that was recorded in the first quarter.

“You wouldn’t know that the balance of power in the market is shifting by just looking at prices and inventory,” said Jordan Clarke, Redfin San Diego agent. “However, buyers’ attitudes are changing dramatically. There are more bidding wars now than there were this time last year, but more homes aren’t selling for above asking price. Once the price gets too high buyers just walk away.”

Bidding wars are becoming more prevalent than they were ago, especially in large, popular metros such as San Diego, California; Los Angeles, California; Fort Lauderdale, Florida; and Denver, Colorado. However, Redfin says that "buyer demand remains high, but it isn’t resulting in a windfall for sellers."

As buyers become more demanding when purchasing a home, only 58 percent of Redfin agents noted that now is a good time to sell a home, the lowest number in three years.

“Sellers tend to look backward, while buyers mostly look ahead,” said Nela Richardson, Redfin Chief Economist. “As a result, more than a quarter of home sellers had to drop their prices in October. However, seller expectations will eventually come down to what buyers are demanding. It’s still a good time to sell, but just may not be as lucrative as many sellers hope."