Although overall job openings, hires, and separations were little changed at the end of October 2015 compared to the previous month, the construction and real estate and rental and leasing sector experienced some positive changes.

The Job Openings and Labor Turnarounds Summary (JOLTS) released Tuesday by the Bureau of Labor Statistics (BLS) outlined job openings, hirings, and separations in the real estate industry and construction divisions in the job market.

According to the report, the job openings level for the real estate and rental and leasing division reached 69,000 in October and a rate of 3.2 percent (not seasonally adjusted), a significant increase from September when the number was only 38,000. Year-over-year this figure is down by 2,000 openings.

Hire rates within the real estate and rental and leasing industries reached 72,000 in October, a slight increase from 71,000 the previous month, the data showed.

Despite the uptick in openings and hires, many people fled the real estate and rental and leasing division in October. There were 45,000 quits, up from 36,000 in September, the BLS said.

Construction workers appear to be needing a few more hands on deck as hiring within the residential construction sector spiked in November openings and hirings rose, while separations and quits declined. 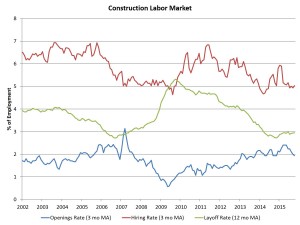 Hiring in construction also fared pretty well, jumping from 317,000 in September to 322,000 in October (seasonally adjusted). The rate of hiring stood at 5.0 percent in October, the BLS reported.

Fewer people appear to be quitting their construction job, with only 90,000 quits in October, down from 121,000 in September, the data showed.

"Rising job openings for the overall economy are affecting many business sectors as the unemployment rate has fallen, with employers wanting new workers but holding greater numbers of unfilled positions," said Robert Dietz, Ph.D., VP for Tax and Market Analysis for National Association of Home Builders. This could bode well for future hiring, but it might also signal that scarcity for labor is becoming a more general concern."