Here are the Best and Worst Housing Markets in America

It has been nearly four years since housing prices bottomed out nationwide. Since then, the fortunes of homeowners and renters alike have been mixed across a wide spectrum depending on where they live, according to a report by Trulia on Wednesday.

Recovery in housing markets across the country has varied widely when other factors enter the equation, such as how much economic growth the area has seen (particularly in employment and wages) and how much housing prices have appreciated. Based on those factors, housing in some metros over the last four years has recovered more quickly driven by substantial economic growth, while housing has been slow to recover in some metros based on sluggish economic growth. Some metros have even seen slow recovery in housing and booming employment or vice versa.

Based on Trulia’s number crunching that figured in house prices, job prospects, wages, vacancy rates, home values, and amount of rent increase to determine what are the best housing markets for both renting and buying. What they discovered was that cities in North Carolina are strong for both home renters and owners since 2012 due to strong economic gains. New Orleans stood out as a more expensive place to own a home because slower-than-national-average job and wage growth that have hampered home price appreciation; it is also a more expensive place to rent because housing supply in New Orleans has declined faster than the national average, according to Trulia.

While cities hit hardest by the recession such as Las Vegas, Detroit, and Sarasota, Florida, have not been favorable for either owners or renters since 2012, places like the San Francisco Bay Area, Denver, Seattle, and Houston have been great cities in which to buy a home in that time due to consistently strong labor market fundamentals. These cities have surprisingly become good places to rent relative to other cities despite rising rents since 2012, according to Trulia, due to strong job and wage growth.

Cities such as West Palm Beach, Florida, and Anaheim, California, were hit hard by the housing crisis but since then have seen substantial home price appreciation. Although the house prices are not quite back to their pre-recession levels in either of those cities, strong labor market fundamentals and declining vacancy rates have made these areas more favorable for homeowners.

Things have played out differently in rental markets, according to Trulia. 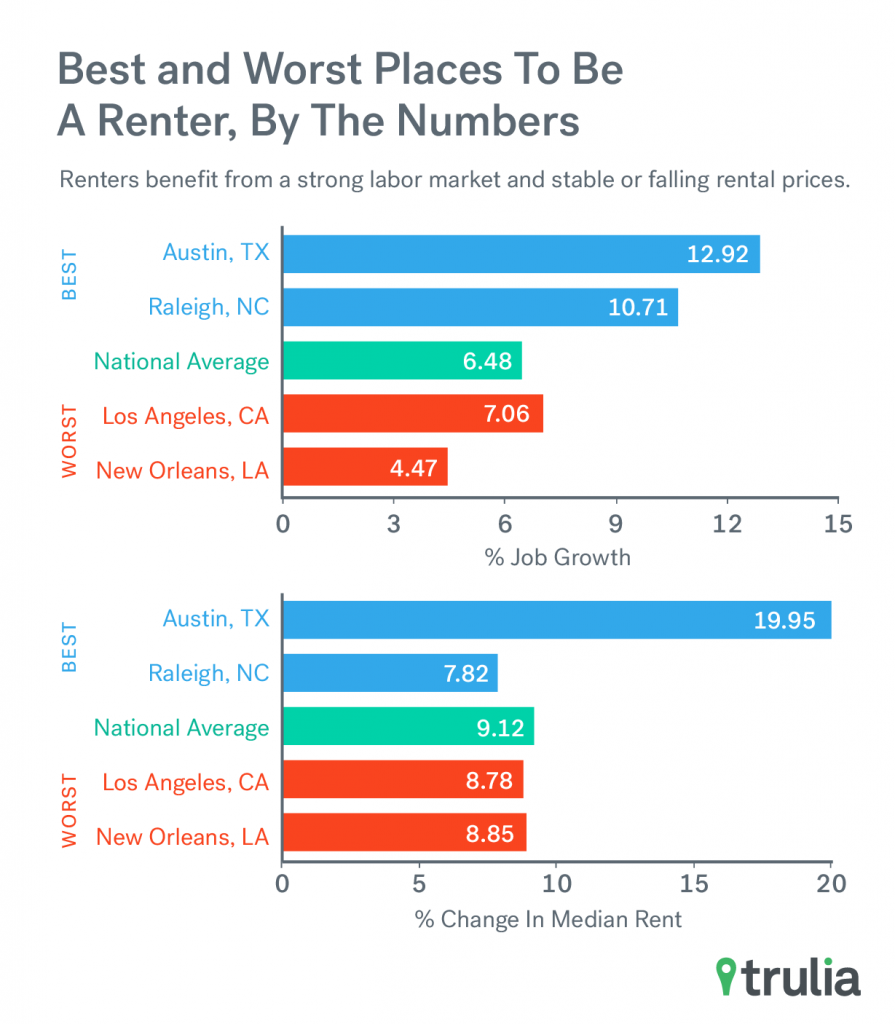 Going back to North Carolina, Winston-Salem has been one of the best cities for rent since 2012 despite below average employment growth—because of strong wage growth and modest rent increases in the last three years. Two more North Carolina cities, Charlotte and Raleigh, are in both the top 10 for renting and owning a home. In both markets, rental prices have increased at a higher-than-average rate and vacancy rates have been declining, but compared with other cities that have seen steep drops in unemployment and rising wages in the last three years, the burdens of increasing rental prices and declining vacancy rates in Charlotte and Raleigh have been fairly forgiving.

“New Orleans made it through the recession relatively unscathed compared with other cities, as the area was still recovering from the effects of Hurricane Katrina,” Trulia said in the report. “But as much of the rest of the country has recovered from job losses and continued to expand, employment growth in New Orleans has lagged behind.”

Washington, D.C., and Los Angeles also made the top 10 list of worst markets to rent—Los Angeles because of rising rents, slow wage growth, and a vacancy rate on a rapid decline, and D.C. due to slow labor market improvements.

Markets that made the list of worst places to own a house since 2012 were Albuquerque, New Mexico; Gary, Indiana; and Silver Spring, Maryland, all of which have performed below average for both labor market metrics and housing metrics, according to Trulia. In Albuquerque, the government sector comprises nearly 21 percent of employment, compared to 14 percent nationally; employment expansion has been hampered in that market since 2012 due to tight state, local, and federal budgets. Slow employment growth and net out migration have resulted in minimum home price appreciation in the last two years in Gary, while in Silver Spring, home prices have appreciated moderately in the last three years, but a rapidly increasing vacancy rate and modest labor market improvements have made that market one of the top 10 worst places to own a home since 2012. 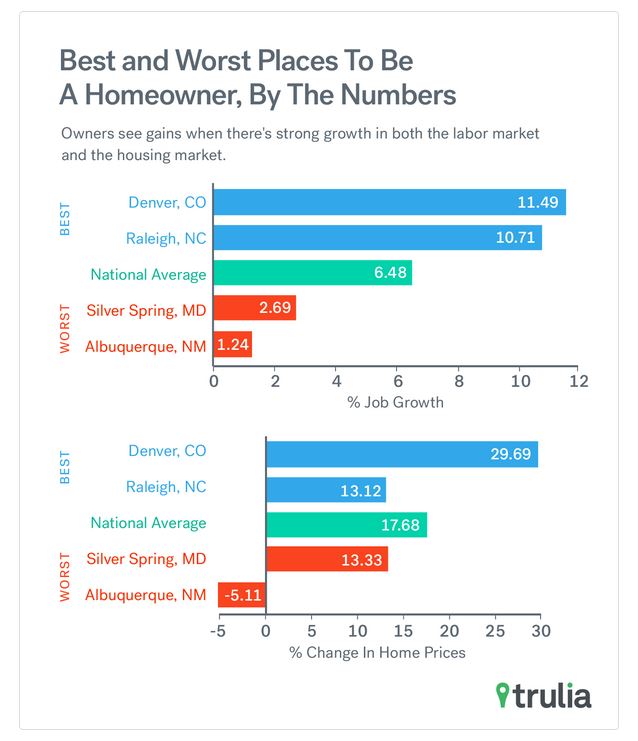