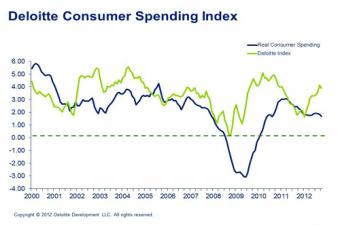 Consumer spending turned down in November after nearly a year of steady gains, according to ""Deloitte's"":http://www.deloitte.com/view/en_US/us/index.htm Consumer Spending Index.

The index, which tracks consumer cash flow as an indicator of future spending, comprises four components: tax burden, initial unemployment claims, real wages, and real home prices. The index dipped from 4.14 in October to 3.89 in November, turning around several months of improvement.

The index reflects data through October but does not yet show the complete impact of superstorm Sandy.

""October consumer spending data shows a 0.3 percent decline. Further declines may emerge in the November data as a result of Hurricane Sandy's impact,"" Deloitte said in a release.

With 70 percent of GDP coming from consumer spending, a continued decline in spending could lead to a negative GDP in the fourth quarter, the release goes on to say. If the fiscal cliff debate comes to a negative end, 2013's first quarter GDP is also likely to be weak.

""After a period characterized by improving housing data and waning energy prices this fall, the underlying fundamentals for consumer spending are beginning to deteriorate,"" said Carl Steidtmann, Deloitte's chief economist and author of the monthly index. ""However, the impact may not be felt until the beginning of 2013.""

While Steidtmann believes the ongoing fiscal cliff debate is unlikely to bring down holiday season sales by any significant degree, tax increases in early 2013 would likely take an immediate toll on spending.

According to Deloitte, the fall in spending can be traced to a slowdown in the rise of new home prices and an accelerating decline in real wages.

""Significant downward revisions in both new home sales and income data were published this month,"" Deloitte writes. ""The new home sales data shows sales began to flatten out in February. The increased building activity in recent months may increase the market inventory rather than reflect new homes sold, and may result in a pullback in spending next year. The inventory issue is now putting downward pressure on home prices.""

Income growth has similarly dropped off, falling in October to $20 billion below May levels.