Inventory is Low, but It’s Lower for Starter Homes

The underlying issue in the 2016 U.S. housing market has been tight inventory in general. But it’s actually worse for starter home and trade-up inventory.

According to Trulia, the number of homes available to the average first-time homebuyer dropped 12 percent since last year, the steepest year-over-year drop since 2013. Trade-up homes dropped 13 percent. Nationally, housing inventory fell for the sixth consecutive quarter, dropping 9 percent from a year ago.

First-time buyers are the ones that are impacted the most by a lack of starter homes for sale, according to analysis from the National Association of Realtors.

“Having starter home options for new buyers is really important,” said Danielle Hale, managing director of housing research at NAR. “But we do find the majority of first-time buyers tend to buy existing homes, because there aren’t many new homes on the market in the starter home price range.” 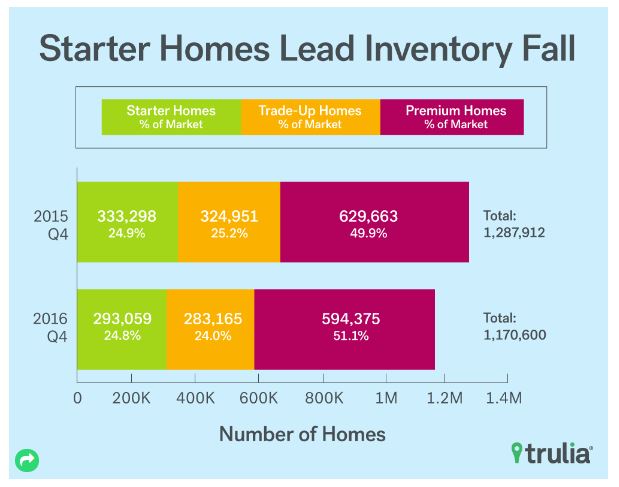 On top of the declining starter home inventory, buyers are paying 2 percent more to get a starter home in the first place, because the shrinking number of starter homes for sale is driving up prices, according to Trulia. Overall, first-timers spend almost 40 percent of their monthly income on the purchase of a home, Trulia reported. Trade-up and premium homes, however, remain relatively affordable, requiring 25.5 percent and 14 percent of monthly income to purchase, respectively. But all categories are up slightly from a year ago in terms of percentage of income spent.

Sacramento, Los Angeles, San Diego, and San Francisco remain near the top of the list of cities least favorable to first-time buyers. So do several Florida cities: West Palm Beach, Sarasota, and Miami. Tacoma, however, saw the largest decline in available starter homes, down nearly 18 percent. A year ago, Tacoma was No. 19 on the list of unfavorable cities to new buyers.

Since 2012, eight of the 10 cities where starter inventory has declined the most are in California, according to Trulia. Las Vegas and Miami are the remaining two. On average, these markets have seen starter inventory drop by about 4 percent over the last four years.