Young Homeowners Finally Ready to Re-enter in the Housing Market

Many factors have been contributed to the lessening number of young homeowners over time—excluding a brief spike during the housing boom—but this may be about to change in the near future.

These prospective homebuyers may be about to make their unexpected grand entrance back into the housing market.

Fannie Mae's most recent Housing Insights report found that young homeowners have been "away" from the housing market due to demographic and social shifts, which include changes in the age distribution of the population, longer educational careers, delayed marriage and childbearing, and rising minority population shares.

The report showed that owner-occupants ages 25 to 34 fell more than 300,000 annually on average from 2007 to 2012, according to the Census Bureau’s American Community Survey (ACS). 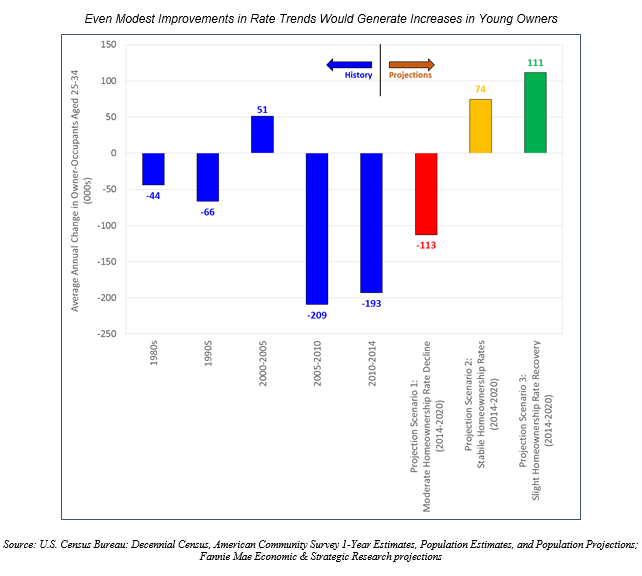 Fannie Mae believes that the number of young homeowners could go three ways. It could continue to decline at the recent pace, remain constant at current levels, or recover slightly, returning by decade’s end to the long-term trend.

"A return to modest growth in young homeowners could have several implications for the housing industry, including creating the need to adjust the size, type, and geographic location of new housing construction, to expand education and counseling efforts targeted at inexperienced homeowners, and to step up efforts to provide services and technologies suitable for youthful home buyers," Fannie Mae said.

Fannie Mae indicated that the rise in young homeowner numbers could " lead to increased demand for starter homes" and "increase demand for services and technologies that are designed to serve youthful home buyers as they search for housing and mortgages."

"It’s difficult to predict, but given that young adults are experiencing steady job gains and the beginnings of an income recovery, and given their persistently strong aspirations for homeownership, stability or modest improvement in homeownership rates is certainly plausible. Recent efforts to expand mortgage credit for first-time home buyers also could help nudge the young-adult homeownership rate in a positive direction," Fannie Mae concluded.

Previous: U.S. Comptroller Warns Banks of Risks From Sub-par Underwriting Standards
Next: Which Mortgage Products Should Lenders be Marketing?