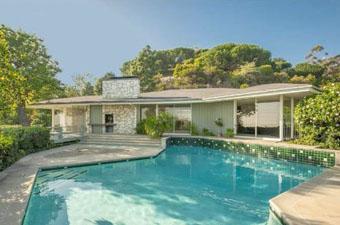 In Los Angeles, California, the Pacific Palisades home once belonging to the nation's fortieth president, Ronald Reagan, has hit the market for $4.999 million. Built in 1956, the property's environmentally-friendly design may be its most famous feature, as the luxurious estate has long been lauded as a forerunner of contemporary green housing concepts.

The 4,764-square-foot abode was crafted by architect William R. Stephenson as a GE Showcase house, and ""according to Curbed.com"":http://la.curbed.com/archives/2012/12/ronald_reagans_general_electric_showcase_house.php, the home boasted modern elements like energy-saving devices and advanced temperature control tools. The website noted of the mansion's legacy that Reagan and his wife, Nancy, listed the home for sale in 1981 when he became president; the couple owned the property from 1957 until new owners purchased the residence in 1982.