How the Cloud Accelerates Mortgage Innovation 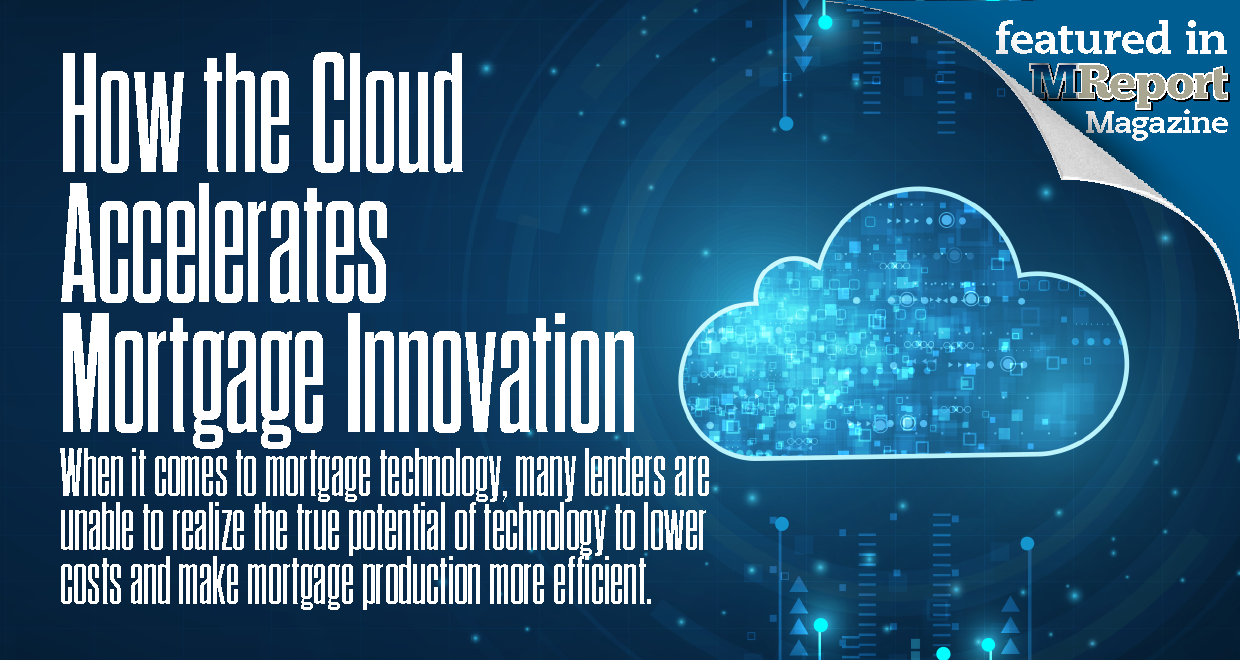 This piece originally appeared in the December 2022 edition of MReport magazine, online now.

When it comes to mortgage technology, lenders have no shortage of options to choose from. Yet many are unable to realize the true potential of technology to lower costs and make mortgage production more efficient.

Of course, mortgage production involves many processes and moving parts that need to work in harmony for transactions to run smoothly. While there are end-to-end mortgage platforms on the market, there is no single technology solution capable of doing everything lenders need to do.

However, the most powerful innovations happening in the industry today are not about any one technology, but instead about how different technologies fit together. And it’s the cloud that makes it possible.

Integrations Made Easy
If you’re a consumer of mortgage industry news, no doubt you’ve come across hundreds of press releases about integrations between different software providers and third-party products and services.

The common theme behind these announcements is generally the same—the combination of two or more solutions helps to simplify the mortgage production process and reduce costs.

The reality, however, is that most mortgage technologies are not easily integrated with other software or systems. In fact, most lenders are either already aware of this or have experienced it first-hand. Typically, there’s a lot of work that needs to happen behind the scenes for an integration to bear fruit.

In recent years, this began to change thanks to two major developments. The first was cloud computing, which enabled lenders to access technology without having to maintain their own IT infrastructure or host on-premises software, which was a huge cost center. The second was the growing use of application programming interfaces, or APIs, which enable cloud-based software providers to integrate products and services more quickly and easily, without lenders spending their own resources to make an integration work.

Simply put, integrations are now much easier because of the cloud and cloud-hosted services like Amazon Web Services (AWS). This is not just some theory, either.

A growing number of lenders are capitalizing on this trend to accelerate loan production and launch new product lines far more quickly than they were capable of just a few years ago.

Lenders Are Taking Advantage
Earlier this year, I began speaking with a lending company that had grown tired of its legacy origination technology, which had severe integration issues and was causing the lender’s staff to constantly rekey data from one system to another. While the lender had already utilized a cloud-based point-of-sale platform, it wanted to take things one step further. In fact, the lender had envisioned a complete roadmap of automation that would accelerate productivity, provide better workflow management, and reduce per-loan costs.

Faster, more efficient loan production wasn’t this lender’s only goal. It wanted to diversify business lines from its previous focus on VA loans. The goal was to add more volume, but they needed technologies that enabled them to quickly launch the new business lines to meet evolving borrower demands and stay ahead of competitors.

Ten years ago, this lender would have found it difficult if not impossible to realize their dreams. Today, however, they were able to find a browser-based, end-to-end mortgage lending system that enabled them to improve productivity and deliver a more satisfying mortgage experience to its customers.

Thanks to new, API-ready technologies built in the cloud and cloud service providers like AWS, the platform allowed the lender to automate many of its origination and process tasks, such as employment and asset verifications.

The company was also able to let its loan officers access the platform through their mobile phones, which they couldn’t do before. Just as importantly, the lender’s operations staff love not having to retype information, which they did constantly with the old platform.

Faster and Better
Cloud-based integrations also do more than turbo-charge a lender’s production process, however. They improve every other aspect of the business as well. For example, when loan volumes began plummeting earlier this year, the default response from most lenders was to let

people go. Such a strategy inevitably results in lower customer satisfaction, as there are fewer people on hand to help those who still want to borrow money to finance a home. In fact, while lenders are originating fewer loans, they are spending more time and effort on each transaction because rates have risen so quickly.

Production efficiencies that are gained through cloud-based integrations help lenders avoid this predicament by allowing them to retain talented originators and staff who are needed more than ever to keep manufacturing loans.

These innovations help with recruiting, too—which is critical given the fact that many talented top producers are looking for lenders that can help them deliver the kind of customer service that led to their success.

In a tough market, great loan officers have zero patience for lenders that can’t deliver behind the scenes. When the market shifts, we inevitably see them jump ship to organizations that can provide the backend support they need to deliver results.

The Platform Matters
It bears noting that successful integrations don’t just happen by accident. Just like every house needs a strong foundation, lenders need an ample, dynamic, and flexible lending platform on which their business can thrive. That’s why we’re beginning to see a major shift away from legacy platforms that were designed before cloud computing transformed our industry and move toward new digital, browser-based systems that utilize the cloud and application programming interfaces.

With old systems, lenders could only patch together different software and third-party products and services after much difficulty. These “integrations” were not seamless—they took a lot of time, money, and effort, and usually drained a lender’s IT budget. Even after spending significant time and money, these integrations failed to deliver solid returns. In fact, they often cost more than they were worth.

When something didn’t work, which was often, lenders had to create multiple workarounds that usually involved someone rekeying data into a different system that should have been automated.

Essentially, lenders were creating their own Frankenstein’s monster and had trapped themselves inside an endless cycle of maintenance and workarounds just to keep everything moving.

With modern, cloud-based technology and APIs, however, more lenders are moving off this treadmill and making progress toward reducing loan cycle times and lowering costs. They are also able to operate more nimbly, as cloud-based technologies allow them to pivot their businesses quickly as the market evolves.

The Power of Adaptability
The late Louisiana State University business professor Leon C. Megginson was known for boiling Darwinism down to its essence, writing, “It is not the strongest species that survive, nor the most intelligent, but the ones most adaptable to change.” In today’s rapidly evolving housing market, these words are worth thinking about.

As challenging as today’s housing market may be, we know with relative certainty that it will bounce back one day. When that happens, it’s highly likely that lenders that are the best at adapting to market changes—primarily by leveraging technological innovations—will be in the driver’s seat.

It’s likely because it’s happened before. Following the Great Recession, as several major banks pulled back from the mortgage business, it was independent mortgage bankers who began investing in new technologies to create a faster and better customer experience. In doing so, they began grabbing market share by the truckload.

Today, while most lenders are cutting staff and waiting patiently for the housing market to bounce back, forward-thinking organizations are doing the same thing.

By investing in cloud-based digital technology and API-driven integrations, they are putting themselves in better position to survive today’s tough housing market while setting themselves up for future success. The question is, who is joining them?

Previous: Recessionary Conditions Predicted by Fannie Mae in Q1
Next: Backyards The Most Sought-After Home Feature

Joey McDuffee is a VP at Blue Sage, a provider of innovative, cloud-based digital lending technology for retail, wholesale, and correspondent lenders that delivers a superior lending experience for all users throughout the loan process. McDuffee has more than 25 years’ mortgage technology experience. He can be reached at [email protected] bluesageusa.com.