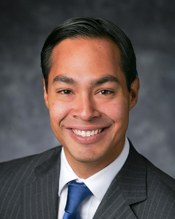 HUD Secretary Julian Castro told an audience at the National Press Club Tuesday afternoon that it was time for the nation to "remove the stigma" promoting homeownership.

During his hour-long speech at the Press Club in Washington, D.C., which included a question and answer session, Castro spoke of the economic progress the nation made in 2014, such as experiencing the fastest job growth rate in 15 years, and he addressed HUD's initiatives which are aimed at promoting, increasing, and expanding opportunities for Americans to own a home.

"Homeownership is still the cornerstone of the American Dream—a fact you can see in the lives of everyday folks," he said. "It's a source of pride. It's a source of wealth, providing both a nest and a nest egg. And it strengthens communities and fuels growth in the overall economy."

Castro addressed last week's announcement that the Federal Housing Administration (FHA) would lower its mortgage insurance premiums down by 50 basis points to 0.85 percent. He said the National Association of Realtors (NAR) estimated that high premiums prevented nearly 400,000 creditworthy borrowers from purchasing homes in 2013, and that the administration expects about two million homeowners to save an average of about $900 a year on premiums.

He said he estimates the lowering of the premiums will help about 250,000 new borrowers purchase their first home.

"This is a common sense step—FHA's premiums will still be 50 percent higher than pre-crisis levels," Castro said. "This premium change only makes an FHA loan more affordable for qualified families. All other FHA requirements will remain the same, including verification of a person's ability to pay. Families still have to qualify for an FHA loan—but when they do, they will find a more affordable path to homeownership waiting for them."

Critics of the Obama administration's initiatives to increase homeownership, particularly relaxing lending standards, say that these initiatives will result in another housing bust and financial crisis similar to the one the nation experienced in 2007-08.

"Some have been surprised by this focus," Castro said, referring to the administration's focus of expanding homeownership. "A few have even suggested that this is a return to the mania that fueled the crisis. It's not. Our nation is smart enough to heed the lessons of the past without forsaking our future. The answer isn't to deny responsible Americans homeownership—it's to do it right."

The administration doesn't believe that taxpayers should foot the bill when mortgage loans default, as they have been forced to in the past, Castro said. Government-sponsored entities Fannie Mae and Freddie Mac remain under conservatorship of the FHFA, as they have been since 2008, which in recent months has become a subject of heated debate as the two GSEs continue to roll in profits.

"The administration supports housing finance reform that gets the taxpayers off the hook, were we ever to experience the kind of housing crisis that we did a few years ago," he said. "We believe there is a sensible way to accomplish that."

On the subject of today's tight lending standards, which have also been a source of debate, Castro said he believes there is room for them to loosen up.

"Underwriting standards are too strict," he said. "We went from one extreme, where it was too easy to get a home loan, to another extreme today, where it is too difficult to get a home loan. Strong, sensible middle ground where we have good safeguards in place so we don't slide back to the past, but at the same time, folks who are ready and responsible to own a home can get access to credit. "

Castro said the administration's focus on expanding homeownership is part of improving the lives of Americans.

"This is what we're about—we're about people," he said. "We're about making their lives a bit better and giving them the chance to thrive, and that's why we're so focused on homeownership. ... HUD is ready to help and to make 2015 a year of housing opportunity."