The nation's economy continued to grow in the ""fourth quarter"":http://www.bea.gov/newsreleases/national/gdp/gdpnewsrelease.htm, helped along by improvements in consumer spending and business investment.

Economists took a mostly positive view of the report. Said Kathy Bostjancic, director for macroeconomic analysis for the ""Conference Board"":http://www.conference-board.org/: ""With the housing market on firmer traction, the ingredients seem to be in place for the economy to remain on a strong growth path, and not be interrupted by fiscal squabbling at the federal level. ... In summary, the economic performance in the fourth quarter and third quarter was a relatively pleasant change for the better. And more of the same could be in store this winter and spring.""

Real personal consumption expenditures increased 3.3 percent in Q4, up from an increase of 2.0 percent in Q3. The price index for gross domestic purchases, which measure prices paid by U.S. residents, increased 1.2 percent compared with 1.8 percent in the third quarter.

On the other hand, the biggest weight on GDP growth came from federal government spending, which was down 12.6 percent compared to 1.5 percent in the third quarter.

Thursday's estimate was the first of three for fourth quarter growth. The second estimate, based on a more complete picture of data, will be released at the end of February. 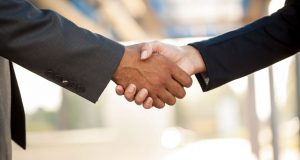