The Week Ahead: Janet Yellen to Testify Twice Before Financial Committees 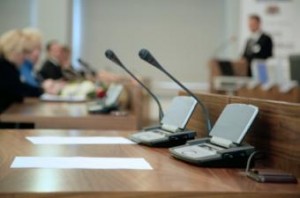 Federal Reserve chair Janet Yellen will have the floors of both the House and Senate to herself this week to discuss the state of monetary policy and the economy before the Congress’s two main financial committees.

On Wednesday, February 10, Yellen will testify on “Monetary Policy and the State of the Economy” before the House Financial Services Committee. The following day, she will present the Semiannual Monetary Report to Congress before the Senate Committee on Banking, Housing, and Urban Affairs.

Given some of the recent major economic news concerning the Fed, namely raising of the interest rate in a decade and an increased scrutiny into the agency’s transparency, it is probably not hard to guess at least some of what Yellen will be talking about this week.

Wednesday’s testimony will be Yellen’s first appearance before the Congress since July 2015 and her first since the Fed raised the interest rate in December.

The transparency issue, which is expected to comprise a hefty part of the conversation Wednesday and Thursday, was a main point of contention in Yellen’s Congressional testimony last July. Then, Committee Chairman Jeb Hensarling (R-Texas) criticized what he perceived to be a lack of transparency from the Fed and said that the central bank needed to be “more predictable” when it comes to monetary policy.

The House responded to Hensarling’s comments in November when it passed the Fed Oversight Reform and Modernization Act (FORM Act), with bipartisan support, to give the Fed a more structured framework for more openly and transparently communicating monetary policy decisions and requiring it to generate a monetary policy strategy of its own design. FORM also eliminates the restrictions on the Government Accountability Office’s ability to audit the Fed, allowing the GAO to conduct an audit of the Fed whenever there is a policy change.

There is also bound to be some discussion about the troubles the Fed is having with its plans to get the interest rate to a full 1 percent by year’s end. The Federal Open Market Committee announced last week that the federal funds rate would remain it its current level of 1/4 to ½ percent for the time being. However, the Fed has discussed the possibility of keeping some three-month Treasury yields below zero for a longer time, amid talk of a negative interest rate, though no serious discussion of introducing such a policy has yet been put forth.

Also a likely set of topics to be discussed this week is how cheaper oil markets and a growing problem with China’s economy could affect the American economy.

Texas has had a multifamily housing recovery following the Great Recession. Single-family construction has been constrained during the recent expansion as a result of higher land prices, labor shortages and tight lending for land development. New-home supply now trails demand, leading to unprecedented price appreciation and record-low inventories. What's ahead for the Texas residential market in 2016?

This conference will explore the trends, challenges and outlook, with a focus on supply constraints affecting the ongoing expansion. Additionally, experts will discuss prospects for the U.S. and Texas economies and address what's ahead for the Texas real estate and energy sectors.

Previous: Where are the Affordable Housing Markets?
Next: Job Gains Weaken, But is the Labor News All Bad?