Fate of FHFA Lies With the Supreme Court 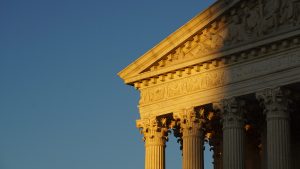 The U.S. Supreme Court last December took up the case of Collins v. Mnuchin, to determine whether the leadership structure of the Federal Housing Finance Agency (FHFA) violates the federal separation of powers, MReport previously reported. In other words, the court must decide if the President has the power to replace, without cause, FHFA Director Mark Calabria.

Fannie Mae and Freddie Mac were placed into government conservatorship in September 2008 after losing billions in the run-up to the Great Recession. FHFA formed in 2008 to serve as the regulator for these government-sponsored enterprises. As is the rule for such agencies, Congress created a “director” position to run it—once nominated by the President and confirmed by the Senate, the director, (Calabria, with whom DS News and MReport is well acquainted), has a fixed term (five years in this case), and can be dismissed only for cause by the sitting President.

As former Freddie Mac CEO Don Layton, Senior Industry Fellow for Harvard University's Joint Center for Housing Studies puts it, "this one individual, therefore, has unprecedented and almost unaccountable power over the GSEs and, through them, over the country’s housing finance system."

Layton has published a paper entitled, "Three Important Decisions the Administration Needs to Make if the Supreme Court Eliminates the FHFA Director's Independence."

First, Layton points to a Consumer Financial Protection Bureau case that already has been decided, which he believes is a good indicator of how Collins v. Mnuchin will go.

"In a similar case last year, concerning the same issue about the CFPB, the court ruled that it was indeed unconstitutional for a single director to have the protection of independence in that manner," Layton said. "While the situations at the two financial regulatory agencies are not exactly the same, the predominant expectation in the housing finance industry and policy community is that the Supreme Court ruling will reach the same conclusion for the FHFA as it did for the CFPB."

With this in mind, Layton said, the Biden administration has three important decisions to make that could be very consequential, for better or worse, in their impact on housing finance (assuming Biden fires, at will, Mark Calabria).

No. 1 is a major policy decision, Layton says: "How much of the independence lost via the Supreme Court decision should the administration, by policy, cede back to the FHFA, as the White House need not keep it all?"

He continues, "Second and third are two related personnel decisions: Whom should the administration appoint as Acting Director of the FHFA, and whom should it nominate for Senate confirmation as the permanent director?"

Layton, in his paper, stresses the weight of the Supreme Court decision for our industry and the economy, given that "lax regulation of housing financial institutions has been a primary cause of the two greatest financial crises in modern times."

Layton's paper dives deep into his considerations and recommendations and can be read at jchs.harvard.edu.

He concludes, should things go as he anticipates, it would be the best possible outcome if—given how much power the FHFA director has during conservatorship over not just the GSEs but the entire housing finance system—the chosen nominee was "someone with as much practical, dirt-under-the-fingernails experience with mortgages and the FHFA as possible—so that their learning curve is minimized and the odds greatly increase of decisions being made, and policies implemented, quickly and accurately."