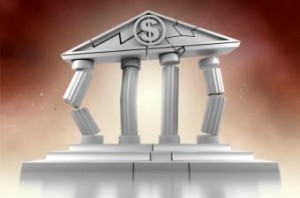 A new bill has been introduced to legislation by presidential nominee, Sen. Bernie Sanders (I-Vermont). The proposal is intended to prevent another costly taxpayer bailout and safeguard the economy by breaking up the nation’s largest banks. Rep. Brad Sherman (D-California) proposed a similar bill in the House.

According to the new proposed legislation, banking regulators would have 90 days to identify commercial banks, investment banks, hedge funds, insurance companies, and other entities whose “failure would have a catastrophic effect on the stability of either the financial system or the United States economy without substantial government assistance.”

Sen. Sanders’ office notes that before the financial crisis in 2008, the Federal Reserve provided $16 trillion in near zero-interest loans and Congress approved a $700 billion taxpayer bailout. Today, the largest banks are 80 percent bigger than they were one year prior to the crisis.

The economy did not stand a chance during the 2008 financial crisis. The Congressional Budget Office estimated that the crisis nearly doubled the national debt and cost more than the Bush tax cuts and the wars in Iraq and Afghanistan combined. The Government Accountability Office pegged the total at $13 trillion.

“Never again should a financial institution be able to demand a federal bailout,” Sherman said.  “They claim; ‘If we go down, the economy is going down with us,’ but by breaking up these institutions long before they face a crisis, we ensure a healthy financial system where medium-sized institutions can compete in the free market.”

At the 2015 Five Star Government Forum, keynote speaker, Rep. Randy Neugebauer (R-Texas) declared in his address that "too big to fail has made it too small to succeed." The Congressman has long fought on behalf of taxpayers and ending government bailouts.

Institutions that would be affected would include Bank of America, Bank of New York Mellon, Citigroup, Goldman Sachs, JPMorgan Chase, Morgan Stanley, State Street, and Wells Fargo. These banks are considered to be “systemically important banks” by the Financial Stability Board, the international body which monitors the global financial system. Entities placed on the too-big-to-fail list would not be able to receive any more Federal Reserve bailouts and could not use customers’ deposits on any risky financial activity.

To read more on the bill and the senators’ speech visit: Sanders.Senate.gov