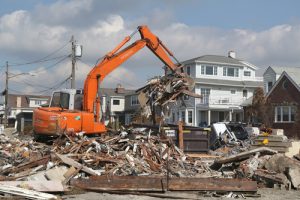 On Monday, the House of Representatives voted to pass H.R.2940, which provides $19.1 billion in recovery funds for disaster-affected areas including Puerto Rico. The House passed the bill after a 10-day recess, voting 354-58. As the Senate had already voted to pass the bill 85-8 on May 23, the bill will now move on to President Donald Trump for his sign-off.

"We must work together quickly to pass a bill that addresses the surge of unaccompanied children crossing the border and provides law enforcement agencies with the funding they need," said top Appropriations Committee Republican Kay Granger of Texas on Fox News. "The stakes are high. There are serious—life or death—repercussions if the Congress does not act."

U.S. Reps. Randy Weber and Lizzie Fletcher introduced the Bipartisan Disaster Recovery Funding Act in May with support from 13 other co-sponsors from Texas, mostly from the Houston area, as well as supporters from other communities waiting on the funding, including Louisiana, South Carolina, Florida, and Puerto Rico.

The Act directs federal agencies to release the $16 billion in disaster funds Congress approved in early 2018 following Hurricane Harvey to different states and territories—including more than $4 billion to Texas—within 60 days.

“After Harvey hit, I fought alongside the Texas delegation to secure additional funds for Harvey survivors,” said U.S. Rep. Mike McCaul. “Unfortunately, the agencies tasked with distributing these funds did not respond with the same urgency.”

According to the Texas Tribune, Texas has already received billions of dollars for Harvey recovery, but each bucket of money is designated for a specific purpose. The $4.3 billion that Congress approved for Texas last February is part of a HUD grant program designed "to help cities, counties, and States recover from Presidentially declared disasters, especially in low-income areas."