FHLBanks Poised for Meltdown; GSEs Not

In its annual report to Congress, released Wednesday, the Federal Housing Finance Agency (FHFA) published the results of Dodd-Frank stress tests that assess what would be the impact of “immediate financial shocks and nine quarters of adverse economic conditions” on capital levels among institutions with at least $10 billion in assets.

The verdict? Federal Home Loan Banks (FHL) came through sparkling. The GSEs, not so much.

According to FHFA, all 11 of the FHL banks maintained compliance with regulatory capital and leverage capital requirements over the nine quarters of the stress test, with the banks of San Francisco and Seattle projecting assets well above regulatory minimums. 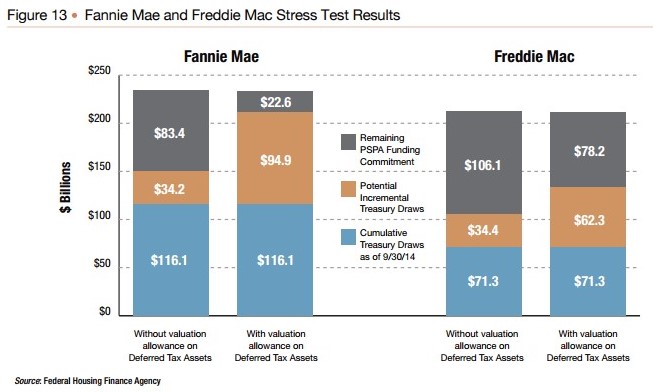 “Though some variables caused negative net income or other reductions in capital under the severely adverse scenarios, these losses were lower than the cushion the FHL banks held above their capital requirements at the start of the stress test,” the report stated.

Nine FHL banks projected negative net income in one or more quarters under the Severely Adverse scenario, but only two projected cumulative losses over the nine quarters. These losses occurred almost entirely in the first quarter of the projection period and were primarily due to “Other Than Temporary Impairment” charges on securities.

But even with projected losses, FHL banks showed they would be able to withstand a repeat of the 2008 crash.

On the other side of the good news, Fannie Mae and Freddie Mac each projected draws from the U.S. Treasury Department to the tune of billions. In the Severely Adverse scenario, Fannie Mae projected additional of between $34.2 billion and $94.9 billion, depending on the treatment of deferred tax assets, the report stated.

Freddie Mac fared only slightly better in anticipated draws, projecting additional draws of between $34.4 billion and $62.3 billion, depending on the treatment of deferred tax assets in the event of a calamity. As of September 2014, Freddie had drawn $71.3 billion from the Treasury Department under the terms of the PSPA, with $140.5 billion of remaining funding commitment.

Freddie Mac projected that the remaining funding commitment under the PSPA at the end of the Severely Adverse scenario would range between $78.2 billion and $106.1 billion.