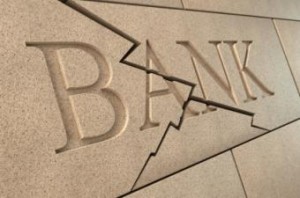 The list of 2014 bank collapses grew into the double digits over the weekend as River Valley Bancorp was forced to close two of its subsidiary operations.

In Illinois, FDIC announced a purchase and assumption agreement with Great Southern Bank, operating in Reeds Spring, Missouri. The bank has agreed to assume all of Valley Bank's $360.0 million deposits as of Q1 and to purchase approximately $375.4 million of its assets. The remaining $81 million will be retained by FDIC for later disposition, the agency said.

Meanwhile, in Florida, Landmark Bank, National Association has struck an agreement with FDIC to take on all of the local Valley Bank's $66.5 million in deposits and to purchase all of its $81.8 million in assets.

Together, FDIC estimates the two collapses will cost its Deposit Insurance Fund $59.1 million, with most of that coming from the Illinois bank.

The latest announcements should come as no surprise, given the difficulties faced by the two operations. Local newspapers report both were classified as "under-capitalized" by regulators as a result of bad loans and soured securities investments.

Previous: Home Flipping Returns Spike in 2013
Next: May Existing-Home Sales Up 4.9%