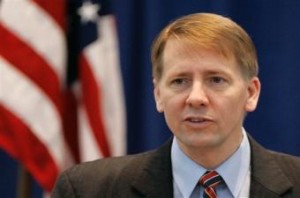 As part of its continuing effort to address nagging allegations of discrimination and subsequent backlash against whistleblowers at the Consumer Financial Protection Bureau (CFPB), the House Financial Services' Oversight and Investigations Subcommittee will on Wednesday hear testimony from CFPB Director Richard Cordray.

Wednesday's hearing will be the third hearing on the matter. In April, the subcommittee heard testimony from two whistleblowers—CFPB senior enforcement attorney Angela Martin and Misty Raucci, former investigator at the Defense Investigators Group—who leveled accusations that CFPB had fostered "a culture of racial and gender discrimination and retaliation against its employees" who complained about discrimination matters.

Raucci, in particular, painted an unflattering portrait of the bureau's enforcement of EEO policies, calling the environment at CFPB "corrosive."

The subcommittee subpoenaed two witnesses who in May testified to poor investigations and slack enforcement of bias-related rules. Liza Strong, director of employee relations at CFPB, said that the bureau failed to meet even minimal standards during the investigation of Martin's claims, though the bureau tried to accommodate Martin's demands. The bureau gave Martin money and created two positions for her, one of which she declined and one she is now unhappy with.

Ben Konop, EVP of Chapter 335 of the National Treasury Employees, testified that women and minority employees at the bureau are underpaid compared to white male colleagues in similar positions and said that CFPB has used "inconsistent reasoning" to deny grievances from female and minority workers.

Cordray, for his part, has acknowledged disparities in performance ratings in 2012 and 2013, and several employees reportedly are being retroactively paid for being shortchanged by the bureau's evaluation system.

In a press statement, the subcommittee called the accusations of discrimination and whistleblower retaliation "matters of grave importance."